Why Al Horford is making 'huge case' to become a starter 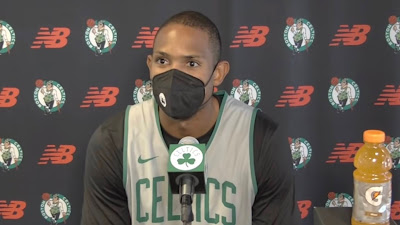 Celtics big man Al Horford has primarily been a starter during his 14-year NBA career. In over 1000 games played, which includes the postseason, the veteran has only come off the bench in 10 regular season matchups and twice in the playoffs -- according to Basketball-Reference.
Now in his second stint with the Celtics, Horford could once again play the role that he has been used to since entering the league in 2007.
Coach Ime Udoka has had nothing but positive things to say about the 35-year old forward, especially following Thursday's training camp practice at the Red Auerbach Center.

"It's noticeable," Udoka said in his post practice presser. "Whether he found the fountain of youth or it's just the time off that he got not playing all the games last year in Oklahoma City, I mentioned having him in Philadelphia where he sat out some games here and there. But, for the most part, he's come back in shape."

For Horford, who only played 28 games last season in Oklahoma City, he had an extended summer due to the Thunder not making the playoffs -- the first time Horford had not played in the postseason in six years (out in 2014 because of injury) and only the second overall in his his career.

"It all started from me being in Oklahoma City," Horford said Thursday. "With their training staff, over there and their group; working with them. And then, transitioning to the summer I had a lot of time (laughs) this summer. Usually, when you finish with the playoffs, you're so tired; you're depleted. You have to do some things to get back to where you need to. This summer, I was healthy. I was able to get after it in the weight room; conditioning. Start building it on the court like I wanted to.

"Going into this year I just feel really good. I feel as good as I've felt probably my NBA career, to be honest."

Horford is not only coming off the longest offseason he's ever had but he's also proving to Udoka that he can easily still start on this current roster as well.

"We want to look at everything, honestly," Udoka said when asked about a possible starting five. "We feel versatility is an asset for us with the lineups we can start. But a guy like Al is making a huge case, obviously, the way he's come in and looked and played. The leadership and things he’s brought. I mentioned some of the versatility with what he can do as far as pass the ball, handle it and shoot it; so he’s an asset there but it's also finding the right balance for our bench, as well."

While Horford has come in rejuvenated and in the best shape, the Celtics had mini-camps prior to this week's training camp, something that 'Big Al' says also helped to make a smooth transition into the workout sessions over the past few days.

“When we started on Tuesday, it was just back to business," Horford said. "It feels like everybody is familiar with one another. With that being said, we'll continue to build it out and we'll find out a little more about everything once we get out there and play, a little bit, on Monday. But, so far, I've been impressed with how consistent everybody has been and how comfortable everybody is."

The Celtics will get a chance to play some real basketball when they tip-off their preseason on Monday against the Orlando Magic at TD Garden.
Joel Pavón
Follow @Joe1_CSP