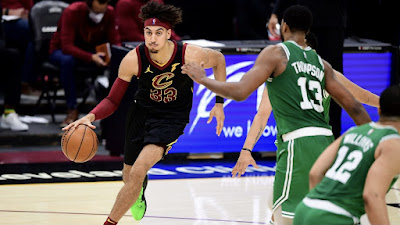 The Celtics have filled their second Two-Way slot by signing guard Brodric Thomas, according to ESPN insider Adrian Wojnarowski.
Thomas, an undrafted rookie in 2020, started last season as a Two-Way player for the Houston Rockets before being waived in mid-February and picked up by the Cleveland Cavaliers for the rest of the 2020-21 campaign.

Free agent guard Brodric Thomas has agreed to a two-way contract with the Boston Celtics, sources tell ESPN. Thomas had stops with Houston and Cleveland a season ago.

In 28 games (one start) with the Cavs, Thomas averaged 4.1 points in 13.4 minutes per contest, which also included a late-season win against the Celtics -- scoring five points and grabbing 10 rebounds.
The 24-year old joins Sam Hauser as the Celtics two Two-Way signees, while the team has 14 players under standard contracts following Jabari Parker reportedly being waived Sunday afternoon.
At 6-foot-5, Thomas averaged 18.5 points, 7.3 rebounds, 3.5 assists, 1.9 steals and 1.1 blocks in 14 games (13 starts) in the G League bubble last season for both the Rio Grande Valley Vipers and the Canton Charge.
Thomas says he's excited about being apart of a winning environment after his first practice with the team Monday and also mentioned that his mother is a Celtics fan.
With one roster spot still open, Boston is preparing to take on the New York Knicks Wednesday night at Madison Square Garden to start the 2021-22 regular season.
Joel Pavón
Follow @Joe1_CSP