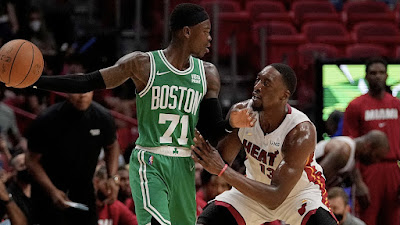 The Celtics concluded their preseason with a 121-100 loss to the Miami Heat Friday night at the FTX Arena.
Shorthanded for the second straight game, Boston were without Jaylen Brown and Al Horford due to COVID-19 Heath and Safety Protocol, plus Marcus Smart -- suspended one game for missing the team's flight to Orlando and Payton Pritchard, who suffered a broken nose against the Magic.
Jayson Tatum finished with 23 points and eight rebounds on 8-of-19 shooting to lead the Celtics, while Romeo Langford went 4-of-6 from deep and scored 18 points in another starting role.
Dennis Schröder returned after missing the previous two outings and started in place of Smart, and added 13 points, six assists and four rebounds. Josh Richardson was also back in the lineup (rest), contributed 12 points against his former team off the bench.
Robert Williams III was a late scratch (knee tendinitis), as the Celtics went to a small with Grant Williams and Jabari Parker up front.
For the Heat it was their fifth win in six tries this preseason, as Tyler Herro continued his hot shooting -- going 10-of-15 and 5-of-6 from behind the arc for a game-high 29 points. Jimmy Butler looked like he's already in midseason form, recording 23 points and Bam Adebayo registered 17 points.
Despite Tatum struggling in the first half (3-of-10) with only 10 points, the Celtics led for most of the first two quarters before the Heat took a 59-54 advantage at the break.
The Celtics All-Star did find his stroke in the third quarter, scoring 13 points in the period while both teams essentially exchanged baskets. Boston trailed 87-81 heading into the final frame following a Max Strus corner 3.
Langford and Richardson got the Celtics within four, but once the rotation players were pulled for the night, the Heat pushed their lead to double-digits for the first time in the game and Boston never recovered the rest of the way.
Miami hitting 12-for-30 (40%) from distance proved to be the difference and their 46.1% overall shooting was tough to defend. The Heat also grabbed 47 rebounds and dished out 19 assists on the night.
Meanwhile, Boston shot 44.4% from the floor, but were only 29.3% from 3-point territory. They grabbed 36 boards and had 20 dimes on 36 made buckets.

"The next few days are going to be important," said C's coach Ime Udoka postgame. "We'll start to focus on New York, and add some more to our tool box."

The Celtics go 2-2 in their tune-up games and will have a few more days of training camp before 2021-22 regular season opens up Wednesday at Madison Square Garden against the New York Knicks.
Joel Pavón
Follow @Joe1_CSP