Jaylen Brown out against Rockets with knee tendinitis 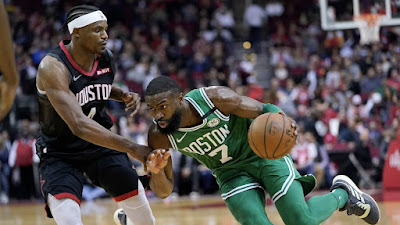 Celtics All-Star Jaylen Brown has been officially ruled out of tonight's matchup with the Houston Rockets.
The team had initially listed Brown as questionable yesterday with left patella tendinopathy, but with Boston currently on a road trip and heading to Charlotte Monday, he'll at least sit the first game of the back-to-back.
It appears this is the same knee issue that bothered Brown last season during one of the Celtics west coast swings.


Brown, who is turning 25 years-old today, recorded a career-high 46 points in the Celtics double-overtime season opener to the New York Knicks on Wednesday after coming off a 10-day quarantine when he tested positive for COVID-19. However, Brown only scored nine points on 13 shot attempts in Friday's blowout loss to the Toronto Raptors at home.
While Brown said he was feeling healthy, it's unknown if his knee was bothering him in either game over the past few days.
Romeo Langford is likely to start in Brown's place after shooting well during the preseason and going 4-of-6 so far from 3-point territory in the Celtics first two games.
Joel Pavón
Follow @Joe1_CSP