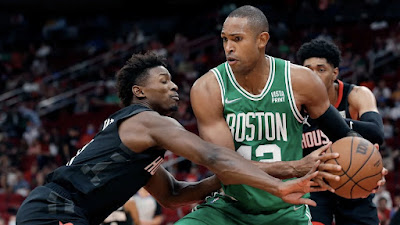 Jaylen Brown is set to return for the Celtics tonight, while Al Horford and Romeo Langford have been ruled out against the Charlotte Hornets.
Brown missed Sunday's 107-97 win over the Houston Rockets with left patella tendinopathy and Langford also sat out with a sore left calf. Today the Celtics announced that Horford won't play due to a left adductor strain, as all three were the only ones listed on the team's injury report.


While Brown and Horford were listed as questionable earlier this afternoon and Langford as doubtful, only Brown was upgraded to available -- but will be on somewhat of a restriction at 30 minutes or so.

"We hit a lot of adversity early with guys in and out, but what we've done well throughout the preseason and so far is throw guys in there, and they've all done well," Ime Udoka said during his pregame presser.

With Horford, Udoka says they're being cautious with the 35-year-old veteran, especially playing a second night of a back-to-back. Big Al recorded a double-double of 17 points and 10 rebounds against the Rockets to help the Celtics get their first win of the season.
As for Langford, who turned 22 today, this will be his second straight missed game due to tightness in his calf and no there's word if he'll miss additional time.
The Celtics plan to insert Dennis Schröder back into the starting lineup again after his 18-point performance on Sunday. He'll play alongside Marcus Smart, Jaylen Brown, Jayson Tatum and Robert Williams tonight.
The Hornets are also shorthanded, with former Celtic Terry Rozier being out with a right ankle sprain and PJ Washington with a knee injury. Tip-off between these two teams is set for 7:00 PM ET.
Joel Pavón
Follow @Joe1_CSP