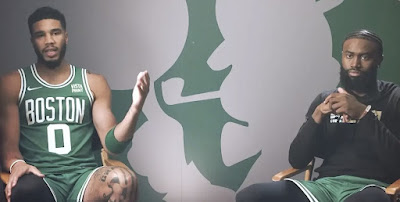 Jayson Tatum and Jaylen Brown want to make one thing super clear before the upcoming season; they have a good relationship that goes way beyond the basketball court.
The Celtics All-Star teammates have been the topic of discussion this offseason, especially when it comes to the media's narrative that the duo doesn't get along, which couldn't be any further from the truth.
Just ask Brown, who would like to set the record straight for probably the last time, when asked about if he and Tatum get along.

"If y'all want to hear it from me," Brown said in a joint interview with Tatum on NBC Sports Boston, "that's my dog."

While Tatum (drafted in 2017) and Brown (drafted in 2016) have been teammates over the past four years in Boston, they've actually known each since their days of AAU basketball. In 2014 they were photographed together during a trip to Kansas and since then their relationship has continued to grow.
So what do both Brown and Tatum think about all these media question regarding if they're in fact best buds or not?

"I don't want say it's weird but could you imagine being our age and being in the spotlight and having all these people want to know if you're friends with another 24-, 25-year-old?" Tatum told NBC Sports Boston's Chris Forsberg. "I've known JB for seven or something years and, over time as he said, we've been through some stuff together. We've been in the playoffs, been in the bubble, had some heated arguments, had some good times. And I think that’s just part of spending time with each other.

"And, yeah, we close. Like, his family has watched my son. People are different, people have different interests but that's just part of coexisting with somebody."

Brown gave high praise to Tatum, saying he would not only win multiple gold medals like this past summer, but be "one of the greats," when its all said and done and reiterating that "he's got my full support."

At the end of the day it seems that both Brown and Tatum only want to see each other succeed and while the 2021-22 Celtics look to have a bounce back season, it only means they will continue to root for one another and enjoy the ride.

"And I don't think me supporting him is stopping anything that I got going on. I really don't believe that," Brown said. "Some people (are) dichotomizing it, or whatever you want to call it, but I can sit here and tell him to his face, to the camera, I want him to be the best version of Jayson possible and however I can help that. I know he could say the same thing about me. Whatever obsession that people got -- we pretty laid back people. We kind of introverted, we kind of stay to ourselves. We hang out -- maybe we don't hang out as much as people would like ..."

The Celtics will host the Toronto Raptors on Saturday at TD Garden in preseason action, as tip-off is scheduled for 7:00 PM EST.
Joel Pavón
Follow @Joe1_CSP