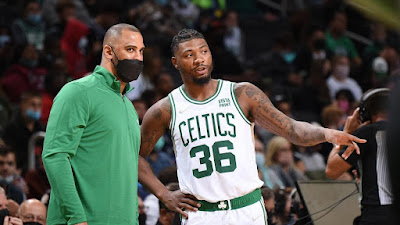 The Celtics are reportedly suspending Marcus Smart for Friday's preseason finale against the Miami Heat, according to Shams Charania of The Athletic.
The veteran guard broke a team rule and coach Ime Udoka spoke to the media not too long following the news going viral via social media.

The Celtics will suspend guard Marcus Smart for Friday's preseason game vs. Miami due to breaching team rule, sources tell @TheAthletic @Stadium. Smart and Celtics have discussed the matter, resolved it and he was with the team on road trip in Orlando and now Miami.


Smart missed the team flight to Orlando, per Adrian Wojnarowski of ESPN, as Udoka didn't give any details on why Smart wouldn't be up when the Celtics face the Heat.

"It's internal, we've handled it. He's remorseful and we hold Marcus (Smart) to a high standard," Udoka said, Thursday after practice. "We made it clear from day one. So, he'll obviously be out tomorrow night. He's with us, here on the trip. And, just look forward to moving on from this; growing and obviously, abide by the team rules and principles. Marcus is one of our leaders who we expect a lot from. He understands that he’s remorseful and we'll move on from there."

When asked if the broken rule by Smart was put in place by the Celtics or the coaching staff, Udoka's response was pretty clear.

"It's one of my rules," Udoka replied. "Like I said, it's been handled internally. He won't play tomorrow and be ready to go for opening night."

Smart, who didn't play in the Celtics 103-102 loss to the Magic on Wednesday night due to having the night off prior to the trip, spoke to reporters right after Udoka and kept his answers short and to the point.

"That's between me and the team," Smart replied during his Thursday presser. "We're handling it in-house."

Dennis Schröder will start in place of Smart tonight, while Payton Pritchard is nursing a broken nose sustained in Orlando and has been ruled out against the Heat. Udoka says the second year guard plans to be wearing a mask and "it's a pain tolerance thing."
ESPN2 has the national broadcast between the Celtics and Miami beginning at 6:30 PM EST.
Joel Pavón
Follow @Joe1_CSP