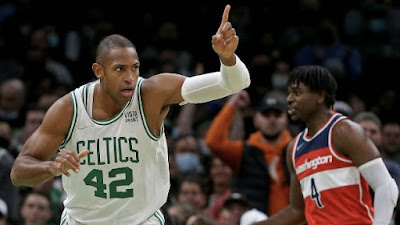 While the 2021-22 season is only five games old, the Celtics at 2-3 have been very inconsistent when it comes to their overall effort thus far.
Following a 116-107 home loss to the Washington Wizards Wednesday, C's coach Ime Udoka didn't seem surprised that his roster couldn't pull out the win. In fact, he called out his group ahead of their second game at TD Garden for their lack of focus in shootaround.

"I told them they were going to get their [expletive] kicked tonight if you come with that focus in the game, and for three quarters we played the same way. We waited to get down 15 and started to play with the effort we had in the other four games," Udoka said during his postgame comments. "It's disappointing. We'll have a chance to hit it again on Saturday. If we bring the right intensity we'll be ok, but you got to show up every night, can't just pick and choose and just show up and think you're going to beat people."

Despite coming back from being down 15, the Celtics defense -- an area Udoka called one of the team's "weakest" -- allowed the Wizards to shoot 51.2% from the field and score 58 points in the paint, while Washington also grabbed 47 rebounds on the night.
Even veteran forward Al Horford was trying to rationalize the Celtics having a hard time with effort and focus after their first five games.

"I really don't know. I mean, we just weren't focused enough," Horford said during his postgame presser. "As a unit we just need to continue to do our jobs, do our jobs and be professional. It's happening right now early in the year, and it's something we have to take care of, and I believe we will.
"Yeah, I'm trying to figure it out myself," Horford added. "We should never be questioning energy and effort. That should never be something. And it's something that we just need to, we're playing for something big here and we just have to make sure we're all on the same page and we're all committed to it. I think that's the biggest thing."

Another clear inconsistency for the Celtics to start the season has been All-Star Jaylen Brown, who has played only four out of the team's five tilts -- two on the road and two at home.
Coming off of a nagging knee injury, season-ending wrist surgery and a bout with COVID-19 during training camp, there were concerns on how Brown would bounce back. He than responded with a career-high 46 points in the Celtics' double-overtime loss to the Knicks to kick-off the 2021-22 campaign, only to register nine points on 3-of-13 shooting in a 32-point blowout loss to the Raptors in the team's home opener.
Brown missed the Celtics' first victory of the season against the Rockets with knee tendinitis and returned to score 30 points in a comeback overtime win to beat the Hornets. But once again struggled from the field on Wednesday to finish with just 13 points.

"It's a tough one, you know, I see it as well," Udoka said after the loss to Washington.
"But the contrast of some of those previous games, especially Charlotte and the New York game, and then the way you see him come out tonight is kind of mind boggling. But you know, it could be a number of things. He was out for 10 days... was banged up with the knee, but just got to find the juice from the start."

Though it hasn't ideal for the Celtics to be winless at home and having to come from behind in all their games so far, there is one bright spot for Udoka and that's been the play of Dennis Schröder.

"He upped the pace, increased the pace as soon as he got in tonight. But he's done that the last three games. All season actually," Udoka said of Schröder's 22-point, six assist performance against the Wizards. "Just more so making shots in these last three games when he started the last two on the road. But his pace changes our tempo as a team and we get out and get much easier baskets. He's finding his groove overall."

In five games played, which includes two starts, Schröder is averaging 15.8 points and 6.8 assists per contest.

His pace changes our tempo, changes the team, and we get out and get much more easy baskets," Udoka said.

Boston will look to get back on track, as they return to action come Saturday night to face the Wizards once again in a home-and-home at Capital One Arena.
Joel Pavón
Follow @Joe1_CSP