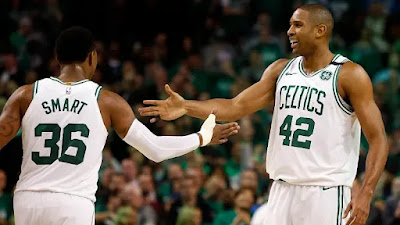 On Saturday Celtics coach Ime Udoka said the team would likely have two captains for the 2021-22 season.
While Jaylen Brown has already cast his vote for Al Horford for one of the two potential spots, there is also a case to be made for the longest tenured Celtic in Marcus Smart -- who's entering his eighth year in the league. But then again Udoka may go with the two pillars of the roster route with Brown and Jayson Tatum as well.
Which ever two may have the privilege, the Celtics last team captain elected was Rajon Rondo prior to the start of the 2014-15 campaign, only to see the All-Star guard get traded a month in a half later and there's been a vacancy ever since. For the rest of the Brad Stevens era, the franchise embraced the 'all players are created equal' concept.

"We've talked about [captains]. I've talked about it with the staff," said Udoka after Saturday's practice session. "You've got guys who have been here, the core guys, with Marcus, Jaylen, Jayson, they've been here forever. But you got a guy like Al who's coming back and is a veteran presence, veteran voice that they all respect and listen to.

"We're going back and forth on that. You can't have four team captains but it's something that we'll pick and choose and we know some of the guys off the top that everybody respects and listens to. We'll just kind of go from there. I haven't determined it yet though."

Horford, in his second stint with the Celtics, is the oldest player on the team at 35 and has always been looked as a quiet lead by example leader. But, despite his locker room presence, there is a chance he could moved due mostly to his contract being partially guaranteed next season.
Either way, Brown noted the responsibility that one has by being named a captain and has nominated Horford for the job.

"It would be an honor, a responsibility that you don't want to take for granted," said Brown in his post practice presser. "Obviously we got a lot of great leaders on our team. Even if I weren't selected, I wouldn't look at it as a bad thing. We have a great group dynamic and we’re all going to contribute in different ways.
"I think identifying voices to listen to, throughout the process is going to be fantastic. We’re definitely going to need, in moments of adversity, a strong voice to carry us through the waves. My vote -- Al's got my vote right now."

Smart has arguably been the unofficial and or emotional captain over the years, even with all the roster turnover, the veteran guard has seen it all since being drafted by Boston in the 2014 NBA Draft. Still, it appears Smart isn't too keen on officially being given the title anytime soon.

"It wouldn't matter to me if I was a captain or not," said Smart in his Saturday presser. "Having that title of captain means nothing. It's just a title. Anybody can be a captain. We're all captains out there. We lead and we show our captain-ism in different ways. I don't think it was a problem last year because we didn't have captains.
"We're all grown here. Gotta go ahead and do your job, plain and simple. Everybody is here to help each other (with) one goal in mind and that’s to help bring a championship to this team. If we do put out the captains, that's fine, that's great. (If) we don't, same thing. Doesn't really matter."

Who ever may or may not be chosen, it will be interesting to find out Udoka's coaching staff's two choices and the reason why in the upcoming weeks. In the meantime, captain or no captains, the Celtics will face the Orlando Magic on Monday in their first preseason game for some real basketball in nearly five months.
Joel Pavón
Follow @Joe1_CSP