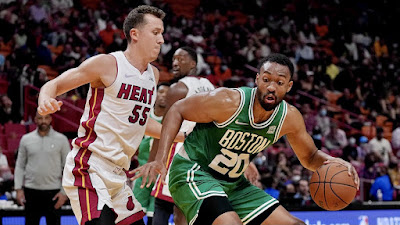 The Celtics are reportedly waving forward Jabari Parker, according to Adam Himmelsbach of The Boston Globe.
Parker, who signed with the Celtics as a free agent at the end of the 2020-21 season, will earn only $100,000 of a $2.3 million non-guaranteed deal, as he was cut just days before the start of the 2021-22 campaign.
In 10 regular season games, Parker averaged 6.4 points on 54.2% shooting from the field and 3.6 rebounds. During the first round of the playoffs against the Brooklyn Nets, the veteran forward bumped his scoring average to 8.5 points on 61.9% shooting, as the Celtics were eliminated in five.
Parker started in Friday night's 121-100 preseason finale loss to the Miami Heat for the shorthanded Celtics -- who are now down to 14 players under NBA contracts and one Two-Way player signed.
Boston is still over the luxury-tax threshold and could decide for the time being to just leave the 15th roster spot open, creating an option for a two-for-one trade without having to cut an additional player.
President of basketball operations Brad Stevens could also be seeking another center since Al Horford's availability is up in the air for the start of the upcoming season, after testing positive for COVID-19 last week and Robert Williams' recent tendonitis in his knee forced him to miss the Celtics' preseason finale.
Parker, the former No. 2 pick in the 2014 NBA Draft, joins Garrison Matthews, Theo Pinson, Luke Kornet, Chris Clemons, Ryan Arcidiacono and Juwan Morgan as players waived by the Celtics in the last few days.
Per The Athletic, Garrison was offered a Two-Way deal, but turned it down as he's seeking a standard NBA contract elsewhere. Undrafted rookie Sam Hauser remains the only Celtics player signed via a Two-Way slot.
The Athletic also reported that Arcidiacono, Morgan, Pinson, Kornet and Clemons are all set to play for the Maine Celtics G League affiliate.
Joel Pavón
Follow @Joe1_CSP