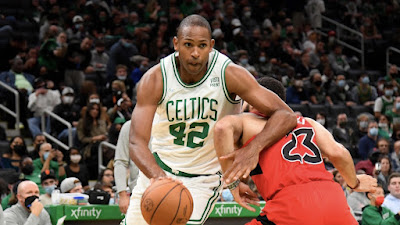 The Celtics announced Tuesday afternoon that Al Horford was placed into Health and Saftey Protocol, while Shams Charania of The Athletic reported that the veteran big man tested positive for COVID-19.
The 35-year old joins teammate Jaylen Brown, who also tested positive for coronavirus last week and was placed into protocol just prior the Celtics' 113-111 preseason win over the Toronto Raptors at TD Garden.


While both Horford and Brown are in quarantine, it remains unknown if either were vaccinated or not.


The Celtics also updated a list of players outside of Horford and Brown who will not play due to rest in Wednesday's preseason rematch against the Magic in Orlando. Marcus Smart, Dennis Schröder, Josh Richardson and Jayson Tatum get to enjoy the night off. It's also unclear when Horford went into quarantine, which means his status for the regular season opener vs. the New York Knicks remains up in the air and Brown is most likely to return in time for that game in Madison Square Garden.

Horford, who started against the Raptors Saturday, finished with 16 points on 6-of-9 shooting from the field and 4-of-4 from beyond the arc. Ime Udoka went with a double-big lineup of Horford and Robert Williams for the first time this preseason to start the game.

"I think that's what's going to make our team so dangerous. If we need to do that, and if not, we will do the typical four perimeter guys with one big guy. But with us, why I think it's going to work is we all take the challenge and can guard the perimeter when we need to, with him, I need to space the floor. It's what I have to do," Horford said via his postgame conference of the double-big lineup with Williams.
"With him, he's the type of big that can pass the ball a little bit. When he rolls to the basket, it puts a lot of pressure on the rim, and it opens stuff up on the perimeter. That's why I feel comfortable that if we need to go to that lineup, it will work."

In the Celtics' first two game of the preseason, Horford's versatility has clearly been a positive, but with this latest blow it would mean 'Big Al' and his training camp has likely come to an end.

"Obviously, he can do some different things from our other bigs. He's just valuable whether he's starting at the four or sliding over to the five, just gives us a different look there," said Udoka of Horford during his postgame presser Saturday. "His shooting, playmaking, IQ, passing -- all the things I've talked about since day one with him, all the things we knew he was going to bring. But we want to see him and Rob play together as well, and some of that means being on the perimeter more. If teams are downsizing, we want to find a matchup that's favorable for him as well, so he's showing us he can guard small-ball fours and guard fives as well. He's pretty much invaluable for us on both sides of the floor."

Boston has two more exhibitions on the road in Orlando Wednesday and Miami Friday before the start of the regular season on Oct. 20 in New York.
Joel Pavón
Follow @Joe1_CSP