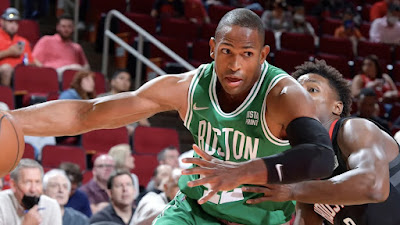 The Celtics avoided a 0-3 start for the first time since the 2013-14 season with a 107-97 victory over the Houston Rockets Sunday night at the Toyota Center.
With Jaylen Brown (knee) and Romeo Langford (calf) sidelined, Jayson Tatum finished with a game-high 31 points hitting 4-of-11 on 3s, while grabbing nine rebounds to lead the C's.
It was not only the first win of the 2021-22 season for the Celtics, it was also the first of Ime Udoka's NBA head coaching career, as the team celebrated in the locker room.

"I just got a water shower in there from the guys, and the game ball, said Udoka after the game. "But I told them, 'It's overdue. You guys took too long to get it.'"

Tatum scored 20 points in the first half, shooting 8-of-13 from the field. Al Horford recorded 17 points and 10 rebounds (three steals, three blocks) for his second straight double-double to secure the win for Udoka.

"It's good to get that off your back," said Tatum after the win during his postgame presser. "I'm happy for him."

Dennis Schröder started in place of the injured Brown, scoring 18 points (five rebounds, five assists) and Grant Williams also had 18 points (5-of-7 from 3) off the bench for the 1-2 Celtics.

"That's a historic win for him. That's his first of many." Grant said about Udoka in his postgame press conference. "We all think highly of him and we're fortunate to have him here."

Rookie Jalen Green led the Rockets with 30 points and Christian Wood registered 20 points, nine rebounds. Kevin Porter Jr. added 15 points and Jae'Sean Tate chipped in 12 points for the 1-2 Rockets.
The Celtics led 53-51 at the half, before using a 12-4 run to start the third quarter that eventually turned into a 20-point advantage -- the largest of the night.
The closest the Rockets would get was 10 the rest of the way, as the Celtics limited Houston to 42.7% shooting from the field and forced 20 turnovers.
After their blowout loss to the Toronto Raptors in their home opener on Friday, the Celtics bounced back in a much better showing against the Rockets.

"We got punked last game, as Ime said. We just wanted to play and show some pride and play the right way out there," Grant Williams said afterwards.

Boston shot 44.2% from the floor Sunday, a huge improvement from their 39% shooting two days prior. They also assisted 22 times on 38 made baskets, while cutting down their turnovers from 25 against the Raptors to 12 in Houston.
The Celtics will head to the Charlotte on Monday to face the Hornets (3-0) in the second game of a back-to-back. Tip-off is at 7:00 PM ET.

Game Notes:
Celtics outrebounded Houston 43-40 and outscored them in the paint 38-32. Old friend Daniel Theis had six points, five rebounds, two assists and a block in 23 minutes as a starter.
Ime Udoka gave an update before tip-off on Jaylen Brown, who turned 25 years-old on Sunday, saying that the Celtics All-Star was experiencing some soreness in his knee.

"Some knee soreness," Udoka said pregame. "Something he dealt with at times last season...He felt a little something last game. Just something we are being cautious with."