Jaylen Brown returns, set to start against the Knicks in season opener 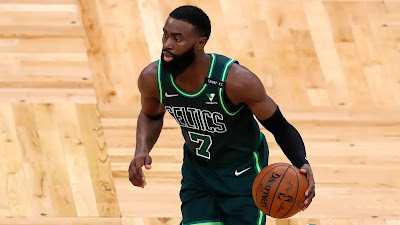 After being listed as questionable for the last few days, Jaylen Brown is out of the league's Health and Safety Protocol and has been cleared to play.
The All-Star wing will start in tonight's season opener as the Celtics take on Kemba Walker and the New York Knicks at Madison Square Garden.
According to coach Ime Udoka, Brown, who missed all but one preseason game due to testing positive for COVID-19 back on October 8th, physically looked "impressively fine considering he's' only just got out of quarantine."
Brown will likely be on a minutes restriction as he continues to works on his conditioning and getting into game shape. Following morning shootaround, the Celtics veteran said "I feel good, considering. I feel awesome to be honest. I'm excited." He also added while his symptoms were mild, there were some breathing issues, but he doesn't think he'll need an inhaler.
Meanwhile, Udoka named Grant Williams as Al Horford's replacement in the starting lineup, as 'Big Al' still remains in Heath and Safety Protocol after also testing positive for coronavirus and there is no clear timeline on his possible return.


Williams, however, was benched during the Celtics' 121-100 preseason finale loss to the Miami Heat for complaining to the referees, something Udoka has made clear is an "ongoing theme" for this team that needs to be corrected.
The Celtics tip-off their 2021-22 regular season against the Knicks beginning at 7:30 PM ET on ESPN.
Joel Pavón
Follow @Joe1_CSP