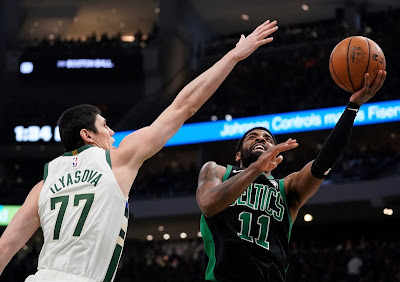 The Celtics continued their impressive play on the road in the postseason, as they beat the Bucks 112-90 to take a 1-0 best-of-seven semifinals series lead over Milwaukee.

All-Star Kyrie Irving led all scorers with 26 points, on 12-21 shooting from the field, to along with 11 assists and 7 rebounds for the Celtics. Al Horford notched his third double-double of the playoffs with 20 points, 11 rebounds and three blocks on the afternoon.

A stunned home crowd at the new Fiserv Forum watched their Bucks, who won 60 games in the regular season and sweep their first round matchup against the Detroit Pistons, get completely out-played and out-hustled by a Celtics team that dominated for nearly the entire 48-minutes.


"It's a great start to a series," Irving said afterwards. "We wanted to come out and make a statement for ourselves first and foremost."

Jaylen Brown shot 8-of-14 from the field to finish with 19 points, while Gordon Hayward chipped in 13 points off the bench for Boston.

The Celtics defense limited league MVP candidate Giannis Antetokounmpo to 22 points on 7-of-21 shooting and just 8 rebounds. Khris Middleton recorded 16 points and 10 rebounds, as well as 7 assists for the Bucks.

Boston jumped out to an 11-point lead in the first quarter, hitting 52 percent of their shots, while the Bucks struggled out of the gate, going 5-of-19 to open up the game.

Milwuakee used a 15-0 run to pull even and go head midway through the second quarter, before the Celtics grabbed a 52-50 lead by halftime.

The Celtics would go on a 9-0 run early in the second half and pushed the advantage back up to double-digits, while the Bucks continued to struggle to get any offense going.

With a 21-point lead margin -- the largest at that point -- late in the third quarter, the Celtics capped off a Sunday afternoon of efficient shooting by going 54 percent from the floor and 42 percent from behind the arc to steal home-court advantage.

Brad Stevens and the Celtics, who were 21-20 on the road in the regular season are now 3-0 as the visiting team so far in the playoffs. They'll look to take a 2-0 series lead when they play Game 2 on Tuesday night.

Celtics limited their turnovers in Game 1 to 12, instead of their average of just over 17 per-game against the Pacers in round-one. Boston also continued to win the battle on the glass during the playoffs; out-rebounding the Bucks 51-44 and out-scoring Milwaukee in the paint 38-26.

Aron Baynes left in the third quarter when he rolled his ankle and after a brief retreat to the locker room, he was available to return, but Stevens elected to rest the big man as the game was already out of reach for the Bucks.

Terry Rozier was the fifth Celtics player to score in double-figures in Game 1, with a stat line of 11 points and 9 rebounds before fouling out.

Celtics players wore a black stripe with the No. 17 on their jerseys to honor the late NBA Hall-of-Famer John Havlicek, who passed away on Thursday at the age of 79.