Jaylen Brown talks about former teacher, who 5 years ago, said he'd be in jail 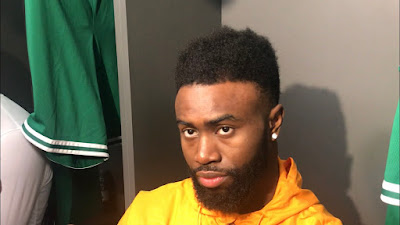 MILWAUKEE -- Five years ago to the day of Game 1 of the Eastern Conference Semifinals matchup between the Celtics and the Bucks, a high school teacher told a young Jaylen Brown that he wouldn't amount to much.

One of Brown's old tweets resurfaced ahead of tip-off Sunday morning. In the tweet, a teenage Brown said his teacher, at the time, told him that she will be looking up his name in Cobb County jail in five years.

Her prediction was, obviously, completely off. As a young NBA player with plenty of potential to fulfill, Brown's career has flourished with the Celtics and Sunday afternoon's performance in Milwaukee certainly exemplified that.

He finished with 19 points on 8-of-14 attempts and was asked about the old tweet Monday afternoon at the Fiserv Forum prior to Celtics shootaround.

"You got one teacher that handles 35 kids in one class -- it's tough. There's a lot of teachers that go through stuff then take a lot of crap all day. So who knows what had been going through with mine that day when she said that. I let it be in the past, I'm going to use it as motivation but I wasn't trying to draw any attention to myself. I had no idea it would turn out to be what it was."

Although Brown declined to share what led to his former teacher saying such a thing to him, he does hope that his story can be an inspiration to youngsters that are currently growing up in the same kind of environment he had to come out of.


"If kids look at it the right way in terms of anybody says anything that tries to put them down or shoot their dreams down and it motivated them to get to where they are, I salute that," Brown said. "But I had no intention of it doing what it did."

Coincidentally, Brown didn't just put together a terrific Game 1 against the Bucks, he also had a thunderous dunk on one of the best players in the league -- Giannis Antetokounmpo. The third-year guard said he thought the regular season dunk he made over The Greek Freak was the better dunk.


Jaylen Brown says the dunk on Giannis Antetokounmpo wasn’t as good as the photo.

“I don’t know, the picture did make it look a little bit better. But he still dunked him.”https://t.co/qJhAxIObZT pic.twitter.com/OseGzHmoVh
— Tom Westerholm (@Tom_NBA) April 29, 2019


However, he did enjoy watching the replay of Sunday's slam a couple of times after Game 1 and thinks the popular picture that's been shared all over social media made it cooler than it actually was. Still, the day altogether was a surreal one for Brown, looking back on where he was five years ago, while looking forward to what's ahead -- an opportunity to compete for a deep playoff run.


"I tweeted it when I was 17-years-old, five years ago," Brown said. "It was crazy to this day because I guess I would be getting out of jail tomorrow, according to the tweet. I'll leave it in the past where it belongs but it's definitely a pretty cool moment to be where I am now.

"Five years ago, who would have thought? Especially, where I come from and a lot of people come from communities worse and better. Everybody has aspirations and dreams to get to where they belong and I'm happy I'm here playing basketball with the Celtics."