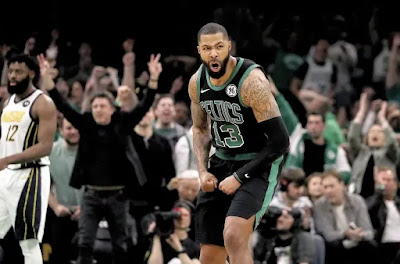 The Celtics topped the Pacers in their playoff opener Sunday afternoon with an 84-74 win, and grabbed a 1-0 lead in its best-of-7 series.

Kyrie Irving, in his Celtics playoff debut, netted 20 points and defended the Pacers at a high level on the opposite end but it was Marcus Morris who immediately made his presence felt from the moment he checked into the game. After falling behind 14-6, Brad Stevens subbed in Morris, along with Gordon Hayward -- who also played in his first playoff game for Boston -- and it made all the difference throughout the opening frame.

Morris did his best Marcus Smart impression of bringing energy from off the bench and he also went off from the perimeter -- where he drained his first three attempts. Morris' 10 points in his first five minutes sparked the Celtics' offense, scoring half of Boston's 20 first-quarter points, including a pair of treys and an old fashion 3-point play just before the second quarter that had him yelling at the top of his lungs to an electric TD Garden packed with excited Celtics fans.


"He's a very good 3-point shooter. We know that," Pacers forward Thaddeus Young said following the loss. "Today he did a really good job of being spaced and being able to knock down shots. We have to make our adjustments, come out of this game and be ready to take him out the game."

However, the story of the game was Boston's start to the second half -- where they held Indiana scoreless for over four minutes in the midst of a 24-3 run. The one-sided frame concluded with the Celtics outscoring the Pacers, 26-8.

From the end of the second quarter into the second half, the Pacers missed 10 consecutive field goals while the Celtics built a double-digit lead and held on throughout the fourth quarter. Kyrie Irving and Marcus Morris each led with 20 points, Jayson Tatum added 15 points while Al Horford finished with a double-double (10 points, 11 rebounds).


"I just tried to enter the game and stay aggressive," Morris said. "I got a couple of bigs guarding so I'm just trying to space the floor and read their closeouts, trying to let the game come to me. I'm just coming in trying to make an impact."

Indiana's starters combined for one point -- from Myles Turner -- in the third quarter, 38 total. Cory Joseph scored a team-high 14 points off the bench while Bojan Bogdanovic's dozen led the starting lineup.


"They played most of that third quarter," Nate McMillan said of his starting unit. "As I mentioned, we held Boston. I don't know if we held them, but they scored 84 points -- I don't know if Boston has scored 84 points the entire season, so defensively, we did some good things. We did good things offensively in the first half, we made shots. The third quarter, we started off as I mentioned, with two turnovers.

"We had open looks that we didn't knock down. I thought we lost confidence in that third quarter and they got the momentum and really never let that go."

To McMillan's credit, the Pacers also managed to forced 17 turnovers. But from a defensive standpoint, the Celtics didn't budge after their explosive third-quarter offense.

From the first half into the second, Irving got things going on offense along with doses of Al Horford and Gordon Hayward's collective scoring but it was Morris' initial approach that got things started.


"He just brought a really intense veteran mindset," Irving said of Morris. "Just being able to go out there and impact the game. He is not so about scoring as much as he is the attitude coming in and really just throwing himself into the game, I appreciate that. I think we all did."


"You saw that coming in the last two days of practice," Stevens said. "He was terrific at practice on Thursday when we went live. I think he probably benefited as much as anybody from being out for a couple of the last season games. I thought he did a really good job and we need him to. He played big and strong, rebounded the ball for us on the defensive end. He's a hard guy to guard with bigs because he spreads the floor for you."


Celtics will look to grab a 2-0 lead when they host Game 2 Wednesday night at TD Garden.

Celtics: Out-rebounded the Pacers, 55-42. Horford led with 11, Aron Baynes pulled down 9 while Irving, Jaylen Brown and Terry Rozier each finished with five.