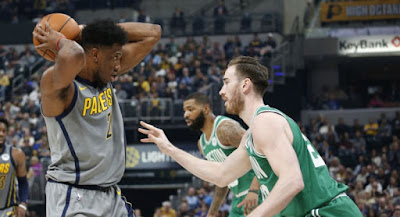 The Celtics have officially clinched home court advantage throughout the first round of the playoffs.

The Brooklyn Nets defeated the Pacers early Sunday night, guaranteeing Boston home court advantage due to its win over Indiana Friday evening -- which gave the Celtics the season tie-breaker in case both teams end the regular season with identical records. With two games left, the Celtics still have a shot at grabbing the third seed if they were to win both and see the Sixers drop their final two games.

Either way, prior to Sunday night's tip-off against the Orlando Magic, head coach Brad Stevens said he didn't plan on sitting his guys whether the Nets topped the Pacers or not. His focus was to see his guys continue to play good basketball, regardless of the outcome between Brooklyn and Indiana.

The opening round of the playoffs will begin in Boston at TD Garden either next Saturday or Sunday.