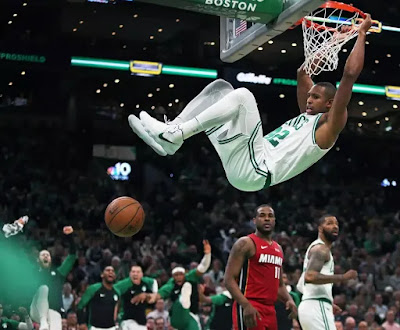 For a team battling for home court in the opening round of the postseason, Monday's 110-105 win over the Heat was an important one.

The Celtics got out to a quick start in the first half, grabbing a 23-point lead before seeing it slowly chip away down to three in the final frame before guys like Al Horford and Kyrie Irving closed the door on Miami, however, Horford's play on both ends of the floor secured the must-needed win and proved to be the difference Monday. His play was vital throughout as he stuffed his stat line on his way to a triple-double (19 points, 11 rebounds, 10 assists) while providing strength on both ends of the floor, especially on defense, as he was able to come up with key stops to prevent the Heat from tying the game.

For Horford, he's come close to the impressive feat countless times throughout his career, specifically during his time in Boston. Whether it was one rebound or a single assist, Horford often flirts with a triple-double the same way a relentless high-school jock flirts with a cheerleader before he finally lands a date.


"There's been a lot of games like that," Horford said after the game. "I looked over at my wife, she was like, '(You) better get it,' Horford laughed. "I was like one rebound, one assist. She kept looking around, I was like, 'I got you, I got you.' I just tried to continue to play the right way. I'm glad it worked out in my favor, obviously we got the win."

Surprisingly, it was only his second-career triple-double, his first as a member of the Celtics. Boston hopes it can follow up Horford's big night with another win at Miami Wednesday, as they'll look to potentially pull ahead of the Pacers for fourth place in the Eastern Conference.

Both teams are knotted up with identical records (46-32) three days ahead of their fourth and final showdown of the regular season Friday night in Indiana. The Celtics and Pacers are pretty much destined to face each other in a couple of weeks for a first-round series, only thing that's uncertain is which city the playoff series will begin in.

How important is home court for the Celtics?


"It's very important," Horford said. "Obviously, I want us just to be playing good basketball but at the same time it would be a huge advantage for us.

"I can only speak for our group, (we're) really starting to tighten things up on the defensive end. On offense, I feel like we executed much better tonight. We have another opportunity on Wednesday to do that and just continue to do it. Our schedule, just happens to be that we play a lot of playoff teams and that's good cause it gets us prepared for the level we need to play at."

Horford's hot streak is coming at the best time for the Celtics. He's scored 19 or more points in each of his last five games, averaging 19.8 points while shooting 56.7 percent from the floor.