Kyrie Irving opens up about the death, impact of rapper Nipsey Hussle 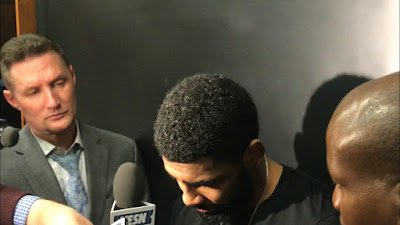 The hip-hop community, along with various professional athletes, mourned the loss of rapper Nipsey Hussle, who was shot to death Sunday in Los Angeles.


"It's just hard," Irving said. "To be young, having the world at your fingertips and then knowing what Nipsey stood for, knowing what he was trying to promote in his community around the world with his music. He may not be liked by everyone in terms of how it was coming across, but I think the reality is that we're all emotionally invested into lyrics that artists are putting out there and what they represent.

"It's just hard because especially men of color losing their lives like that in their communities, and a lot of questions, and it probably doesn't make it to this stage and this platform because it's not every anybody else's favorite artist so they probably don't care enough but for us we're all very connected in a lot of different ways in our communities. From me being from Jersey, being in LA, having a lot of friends out there, it's just hard. It's just hard because a lot of rappers and artists and entertainers lose their lives early, long before they get to really change the world and it is a sad day."

The Grammy-nominated artist was killed outside of Marathon Clothing, a store he owned that was located in the Hyde Park section of LA, and was pronounced dead less than an hour after the shooting. He was killed one day before he was supposed to meet with the Los Angeles Police Department to discuss preventing gang violence in the community.

NBA players such as LeBron James, Steph Curry, Chris Paul and others paid their respects to Hussle via Twitter. He was only 33-years-old.


#Celtics guard on the death of rapper Nipsey Hussle and what it means to players and the rap community: