Brad Stevens prepared for Antetokounmpo to deliver in Game 2 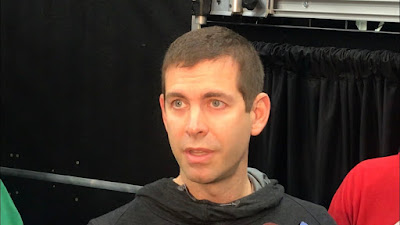 MILWAUKEE -- Head coach Brad Stevens understands the likelihood of seeing Giannis Antetokounmpo shoot 33.3 percent from the floor like he did Sunday afternoon against the Celtics, is highly improbable.

He expects The Greek Freak to bounce back from his Game 1 performance, where Boston forced him to miss shots in the paint and pushed him out towards the perimeter into defensive coverages that turned into missed attempts and turnovers. Stevens also knows that if his team defends Antetokunmpo the exact same way in Game 2, we could still see a completely different game by the All-Star forward.

It doesn't guarantee that we'll see the same results as Sunday's performance.


"Giannis can have 40 (points) on any given night and be guarded with the exact same intensity, the exact same focus and everything else because he's that good," Stevens said. "We're guarding him with everybody, not just one guy. But certainly, Al (Horford) and Baynes will get the majority of that assignment, but he's a hard guy to guard. You have to be ready for him to go 3-for-5 from 3 and throw in a couple of those drives that are really hard for the normal human being to make."

Antetokounmpo enters Tuesday night's game averaging 25.4 points while shooting 47.8 percent from the floor throughout the postseason. Although the Celtics defense on not only Milwaukee's superstar, but the rest of the supporting cast, was certainly the headline of Game 1, Boston's offense was just as impressive.

Boston limited the Bucks to 90 points, including 2-of-11 from the starters not named Antokounmpo and Khris Middleton (5-of-12), a very difficult feat to accomplish against a team that topped the league, along with the Warriors, in points scored per game (118). Meanwhile, the Celtics shot 54 percent from the field.

The Bucks also led the league in defensive efficiency, Stevens reminded reporters Tuesday morning just how good Milwaukee is on the end of the floor.


"Our first two playoff opponents are not good defensives, they're elite defenses," Stevens said. "Indiana did not get enough credit for that in our series -- how good they were. How disciplined they were, how tough they were, how physical they were. From a preparation standpoint, getting ready to play this series after playing such a great, great defense, we know that Milwaukee's the same. Milwaukee's length, their system, their toughness, they're hard to score on early in the clock. They're very disciplined, they sometimes make you take shots you don't want to take."