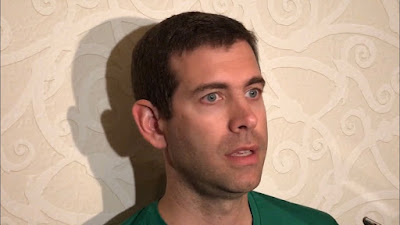 INDIANAPOLIS -- Celtics head coach Brad Stevens is preparing to do something he's never done before -- complete his first playoff sweep.

With a 3-0 lead against the Sixers last year, the Celtics had an opportunity to close out Philadelphia on the road in 2018 but fell short before eventually winning the series in Game 5 at TD Garden. Stevens, who said he looks back on that experience ahead of Sunday's Game 4 against the Pacers, understands that having the correct approach doesn't necessarily translate into a good game.

He's hoping that won't be the case as his team heads into Sunday with a 3-0 lead against Indiana.


"You always draw on the experience, our approach to Game 3 was much better than our approach in a couple of those last year," Stevens remembered. "I thought our approach to Game 4 last year was good, we just got beat. I didn't think we played great but our approach was good against Philly. Sometimes that happens. We want to play well, our focus is more on playing well and being the best version of ourselves. We don't feel like we've been that yet. Pacers have had a lot to do with that. Hopefully we can play better."

The Celtics wrapped up film study Saturday afternoon in preparation for Game 4. Al Horford was asked if he too thinks about how things unfolded in Philadelphia last year, the last time Boston held a 3-0 lead in a best-of-7 series.


"Yeah, no question about it," Horford said. "This our second time going around as a group, for the most part, and our guys, we all know what to expect. How we need to come out and compete."

What's it going to take to avoid repeating what happened in Philly last year?


"Our focus," Horford said. "Our focus level needs to be very high like it was in Game 3, understanding that they're a team that plays hard regardless of the situation. We have to be able to match that intensity."