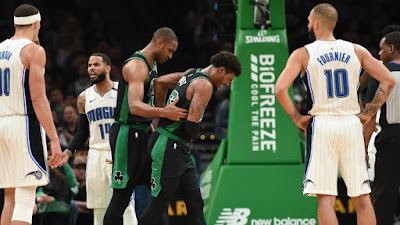 The Celtics for the second straight postseason will begin their playoff run with Marcus Smart on the disabled list. According to ESPN's Adrian Wojanarowski, the veteran guard has suffered a torn left oblique and could miss the first two rounds of the NBA playoffs


Marcus Smart has suffered a torn oblique on left side and could be sidelined for the first two rounds of the playoffs, league source tells ESPN.
— Adrian Wojnarowski (@wojespn) April 10, 2019


Smart, left in the third quarter of the Celtics loss to the Magic on Sunday night and did not return when he fell to the floor in pain while grabbing his side and asked to come out of the game. The Celtics guard, along with six other teammates, missed the regular season finale win over the Wizards after Brad Stevens told the media Smart was back in Boston resting and listed as 'day-to-day.'

About an hour after Wojanarowski's tweet went viral early Wednesday evening, the Celtics released a statement via the team's website that confirmed the injury and a timeline of 4-6 weeks for Smart to resume any basketball related activities.


"The Boston Celtics announced today that a Wednesday afternoon MRI revealed that Marcus Smart suffered a partial avulsion of his left oblique abdominal muscle off of his iliac crest. The injury occurred at 6:44 in the third quarter of Sunday’s game against Orlando, following contact with the Magic’s Nikola Vucevic.

Smart is currently expected to return to basketball activities in 4-6 weeks. Further updates will be provided as appropriate." [Celtics.com]

While the time-frame is the worst case scenario for an oblique tear to heal, Smart is at the very least going to miss the entire first round when the Celtics tip-off against the Pacers this weekend at TD Garden.

If the Celtics were to advance past Indiana, it's likely Smart would miss a second-round matchup as well against the Eastern Conference's top-seeded Milwaukee Bucks, assuming they beat whoever the eighth seed is (Pistons or Hornets).

Coach Stevens will have to make a decision on who he'll start in Smart's place and all signs point to Jaylen Brown, who is coming off recent lower back spasms. Brown is a capable backcourt and wing defender, as he's also been the Celtics most consistent scorer off the bench all season.

Terry Rozier could also be another option to start alongside Kyrie Irving, after a successful postseason last spring, 'Scary Terry' was a threat on both ends of the floor. Then of course, there's Gordon Hayward who could make things interesting against a big Indiana Pacers team.

Smart, 25, is the longest tenured Celtic and has improved drastically on offense, especially after being inserted into the starting lineup following the team's 10-10 start to the 2018-19 campaign. He averaging 9 points (42.2 percent shooting from the field, 36.6 percent from 3), 3 rebounds and 4 assists this season.