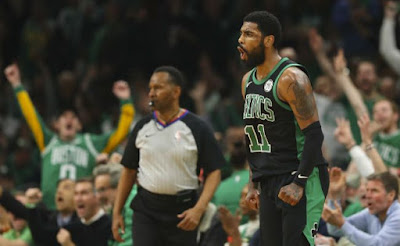 Kyrie Irving had plenty of reasons to smile after Game 1 of the Celtics' best-of-7 series against the Pacers.

For starters, the All-Star point guard played in his first playoff game in two years, first as a member of the Celtics. Another reason? Well, taking a 1-0 lead is the obvious one, Boston protected home court advantage -- something they fought hard for throughout the final eight games of the regular season.

However, the biggest reason Irving was all smiles at the podium after Boston topped Indiana, 84-74  was when he explained the way the Celtics went about it. They not only stayed level-headed throughout their first half, double-digit deficit but they turned things up a notch in the second half when Boston went on a 24-3 run that the Pacers couldn't recover from.

Irving was asked about what was discussed in the locker room during halftime that led to the turnaround.


"Not really a big discussion, I think that we understand the position that we're in," Irving said. "It's no time to really hamper on the mistakes that happened in the first half. At this point it's really just next thing. What's the next thing that we can impact the game? What's the next thing we have to do to be more locked in? And when you have that type of mentality, then it's no time to be fixated on all the mistakes. It's been positive, didn't really need to discuss anything at halftime."

Throughout the course of the season, the third quarter has been a dreadful one for the Celtics. Boston finished top-10 in most third-quarter points allowed prior to Sunday -- its been the reason for an overabundance of losses.

But that didn't stop them from having a short-term memory about what transpired in the first half in their forward-thinking approach, following a 45-38 halftime deficit.


"We know offensively, that probably was the worst half we've played all season and despite the game's field goal percentage, I think we ended like 36 percent. So (just) to be in a dogfight like that -- did we score 90 points? No," Irving chuckled after answering his own question. "I've been in a few playoff games where I've been on both ends but that's where the really gritty individuals make their mark and just the focus level on the game plan really comes to the ultimate level and we depend on each other that much more when we're in the trenches like that.

The Celtics defense held the Pacers to 29 second-half points, including only eight in third quarter. Although Boston shot 36 percent from the floor and committed 17 turnovers -- a dream scenario for Indiana -- the faults didn't determine the outcome of the game.

Boston responded well to adversity in its first game of the playoffs. It was a great indicator of how far Brad Stevens' team has come, a very long way from the days of the early regular season woes.


"Maybe the best combination for our team," Brad Stevens said. "It was hard. It wasn't pretty, things went against us. Even a couple of bounces went against us in the first half where they picked it up and hit end-of-shot-clock plays or put-backs. But you've got to stay together and you've got to grind it out."

Irving becomes only the third player in Celtics history to finish with at least 20 points, 5 rebounds and 5 assists during their playoff debut since Isaiah Thomas (2015) and JoJo White (1972).