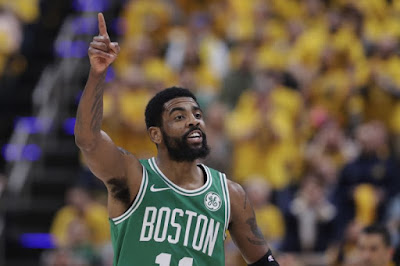 INDIANAPOLIS -- When Kyrie Irving was seen on the bench getting his right hand checked out just before halftime in Game 2 of the Celtics' best-of-7 series against the Pacers, it didn't seem like a big deal at the time.

Fast forward to Celtics shootaround Friday afternoon at Bankers Life Fieldhouse, Irving was seen getting his hand checked out once again just as Boston was wrapping things up. Head coach Brad Stevens was asked about Irving's health and if it the medical staff had brought it to his attention at some point between Wednesday night's Game 2 matchup and Friday morning's shootaround.


"It has not been discussed other than just that he got it hit and it was looked at," Stevens said. "So it wasn't anything that was a major concern. Otherwise, they would have looked at it a lot closer, I'm guessing."

Celtics hope Irving's right hand doesn't worsen. It's something worth keeping a close eye on as Boston, with a 3-0 lead, will look to close out the Pacers in Indianapolis Sunday afternoon.