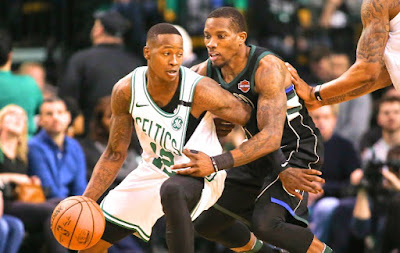 The NBA announced on Wednesday that Game 1 of the Eastern Conference semi-finals between the Celtics and Bucks has been scheduled for Sunday afternoon, tipping-off at 1 PM from Milwaukee.

NBC Sports Boston's Chris Forsberg tweeted out the news about the start of the much anticipated second-round series that is set for April 28th on ABC. Game 2 and the rest of schedule have also been released, but only the dates and not the times.


Boston completed it's four-game sweep over the Indiana Pacers just over 72 hours ago, while the Bucks also swept their first-round matchup against the Detroit Pistons on Monday.

Celtics coach Brad Stevens seemed frustrated when asked about the scheduled not being released yet and not knowing the official start date of the series versus Milwaukee early Wednesday afternoon.


"This one's been frustrating, because obviously we've been not playing games since Sunday night," Stevens said to 98.5 The Sports Hub's Zolak & Bertrand during his radio interview. "So, to create a practice schedule where you can practice appropriately, prepare appropriately and rest appropriately obviously depends on when your next game is."

Stevens has been using his time off wisely as he prepares his team to take on Giannis Anteteokounmpo and the Bucks. This will be the second straight year that the Celtics will face "The Greek Freak" in the postseason, as Antetekounmpo averaged 25.7 points, 9.6 rebounds and 6.3 assists in last season's playoff series that Boston won in seven games.


"Just for two years. I mean, that’s all," said Stevens on game-planing against Antetokounmpo. "He’s special. We played against them in the playoffs last year and he was special. He was an All-NBA player last year. He’s the probable MVP this year. What he does not only from the standpoint of scoring, handling, defending, rebounding – go on down the list – just his tenacity and the way he attacks the game is special and clearly is contagious."

The Celtics will not have home-court advantage this time around, after the Bucks finished the regular season with the league's best 60-22 record. Boston will open up as a +240 underdog, while Milwaukee is -300 favorite to win the series, according to SuperBook USA.