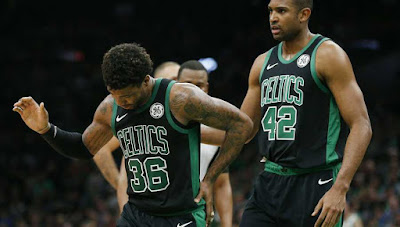 The Celtics will be without Marcus Smart, at the very least throughout the first round of the playoff against the Indiana Pacers.

As news spread Wednesday evening of Smart being out between 4-6 weeks with a torn left oblique, which he injured in the Celtics loss to the Orlando Magic this past Sunday, Danny Ainge was one of the many surprised to learn about the results of the guard's MRI after he called Smart's status "day-to-day" just hours before.


"I feel really bad for Marcus," Ainge said on Thursday at the Auerbach Center. "I know how well he's playing right now. I know how hard he's worked to get ready for this moment, but injuries are just part of it. Part of what we all have to deal with and it’s an opportunity for someone else. Hopefully we can keep playing so Marcus gets a crack at the playoffs this year."

Smart missed the Celtics first four games to start last postseason's opening round against the Milwaukee Bucks with a broken thumb, but was able to re-join the team by Game 5. This time around Smart has suffered a much more severe injury in an oblique tear, which could sideline him through the second round as well.


"He’s in OK spirits. He was bummed," said the Celtics president of basketball operations. "He was in pain. … Thank goodness we have other guys that can step up and take Marcus's spot. No one completely replaces Marcus, but it's an opportunity for other guys to play. Maybe Terry (Rozier) will have some fun now."

Gordon Hayward, who is preparing to play in his first postseason since 2017 in Utah, also chimed in on Smart's injury and what his teammate must be going through emotionally. Hayward remembers vividly what it felt like watching the Celtics from afar last year make a run to Game 7 of the Eastern Conference Finals without him.

Celtics coach Brad Stevens had no time to let the shock of Smart's injury set in, as he's gearing up to move forward with the rest of his roster, who have battled through different ailments all season long.


"I just think that's part of it," Stevens said after practice on Thursday. "You prepare all NBA season to be ready for that. How many games did we have our full group together, especially after the first 15 or 20? That’s part of it."

Stevens, who has gone through 23 different starting lineups during the regular season, is going to have to throw out one more that he believes will work best against the Pacers. Of course, the Celtics coach was asked who would Smart's replacement be come Game 1 on Sunday.


"I think it's somewhere down to 11 guys," Stevens joked. "I got an idea, but I'm going to see how the next couple of days play themselves out, too. We got two more days of practice, we'll see. And starting isn't that important to me, how we rotate is probably more important to me, but we'll see."

While most Celtics fans might have Jaylen Brown or even Hayward penciled in to get their starting jobs back, one guard's role who has already increased with Smart out for a significant amount of time is Terry Rozier.

Rozier came up big for the Celtics (in Kyrie Irving's absence) in last year's playoffs and he now feels like he has another opportunity to contribute in a big way, despite an up and down 2018-19 regular season.


"I feel like I'm more important to the series now, I'm more needed," Rozier said. "Obviously I'm going to have to step up. I'm gonna be ready for it."

If Tuesday night's season finale against the Washington Wizards was any indication that Rozier is still capable of great production when called upon (21 points, 4-8 from 3) in limited minutes, then that makes Stevens' job that much more easier.


"Everybody has to be ready when the playoffs come because everything else is out the window," Stevens said after the Celtics comeback win in D.C.. "It’s who gives you the best chance at winning."

No one is more self aware than Rozier when it comes to their production, but any variation of "Scary Terry" from a year ago is exactly what this Celtics team needs if they want to make another deep playoff run.


"I'm going to go out there and play my game. I'm not going to try to imitate nobody else or be nobody else, be somebody that I'm not," Rozier said. "It's tough making up for a guy like Smart, the things he's capable of doing out there, but we've got to move on."

As deep as the Celtics roster is on paper, when someone like Smart goes down it's not that easy to just plug the next guy into his spot. Though no one will truly replace Smart's defensive mindset or better yet, his heart, there's no other coach that has gotten the most of his players than Brad Stevens, especially in the postseason.


"We want everybody to play within what we're trying to do to their individual strengths," Stevens said. "I just think ultimately whoever is playing together needs to focus on what they’re jobs are, control what they can control, and that’s that. Nobody’s going to be Marcus Smart. We don’t expect anybody to be Marcus Smart."