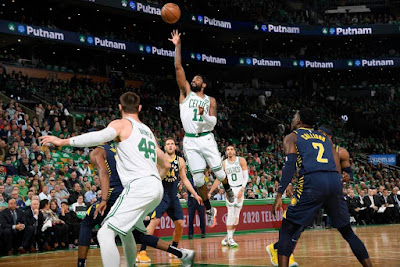 The Celtics now have a 2-0 lead in their best-of-7 series after topping the Pacers, 99-91, Wednesday night at TD Garden.

After trailing the Pacers throughout the entire third quarter, the Celtics chipped away at a 10-point deficit in the final frame before eventually pulling away. Kyrie Irving's 8-0 run against the Pacers granted the Celtics their first lead of the second half, 86-82 with 5:25 left to play before Indiana caught fire from behind the arc.

Wesley Matthews drained one from deep, Bojan Bagdanovic netted a pair of 3-pointers, and all of a sudden the Celtics trailed by two points (91-89) with just over two minutes left. But the inexperienced Pacers showed their true colors -- they committed back-to-back turnovers to end the game, including a wild inbound pass that flew into the stands while they were trailing by only three points with 12.1 seconds on the clock.

On the very next play Al Horford hit Jayson Tatum with a pass and was fouled on a two-handed slam. He would hit the free-throw to complete the 3-point play and make it 97-91 to seal the win over the Pacers with 8.8 seconds left.

Along with Tatum, who scored six of the final eight points for the Celtics, veterans like Irving, Horford and Gordon Hayward collectively closed out their opponent with stellar offensive execution and key stops on the opposite end.


"You know, just continue to play the game one possession at a time," said coach Brad Stevens, who earned only his three technical foul of the season in the third quarter. " I thought the group at the start of the fourth kick-started us off well, and then when some of our starters came back in, I thought they really played well.  Al [Horford] played I think 16 straight minutes or 15 straight minutes – I thought his play on the glass, his play protecting the rim, and then everybody else moving the ball and finding the next right shot just kind of allowed us to hit singles and get back in it."

Irving led all scorers with a game-high 37 points on 6-of-10 from behind the arc and 15-of-26 overall shooting. The Celtics All-Star also dished out 7 assists, while adding two block shots and a steal on the defensive end. Tatum finished up with 26 points and Hayward chipped in 13 points off the bench.

Bogdanovic shook off his poor Game 1 shooting performance, scoring 23 points (4-8 from 3) to along with 8 rebounds to lead the Pacers. Thaddeus Young added 15 points, while Tyreke Evans (7 rebounds) and Darren Collison both finished with 13 points a piece.

Indiana, who had a halftime lead of 52-50, made sure not to buckle in the third quarter like they did on Sunday afternoon, instead they collapsed in the fourth and Boston took advantage with their home crowd behind them.

The Celtics began the fourth quarter on a 18-3 run and Indiana went over seven minutes without a field goal in that span. Boston would outscored the Pacers 31-12 to finish the game.


"There’s always been one quarter that kills us in the second half; it's either the third or the fourth quarter," said Thaddeus Young. "Last game it was the third quarter and as you can see tonight it was the fourth. We only scored 12 points and they scored 31. It's always tough, we're getting good looks and shots are not falling. They are picking up their defense in the fourth and we’re playing as hard as we could and we’re doing the same things that we've been doing. The biggest thing, like I’ve always said, is we just got to put together a 48-minute game and we haven’t been able to do that."

Turnovers continues to be a problem for the Celtics as they coughed-up the ball 14 times that resulted in 20 points for the Pacers on the other end. Boston has now committed a total of 34 turnovers in two games so far, that's something to keep an eye on when they hit the road.

Boston out-rebounded the Pacers for the second straight game (48-36), as Al Horford (10), Jaylen Brown (9), Terry Rozier (6), Kyrie Irving (6) and Gordon Hayward (5) handled the majority of the work on the glass. The Celtics also shot an impressive 47.6 percent on the night, a huge improvement from their 36.4 percent shooting in Game 1