How Al Horford, Celtics held Antetokounmpo down in Game 1 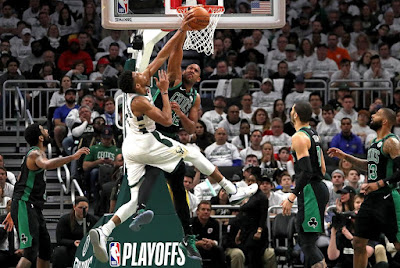 MILWAUKEE -- No other member of the Celtics has more playoff experience than Al Horford. With 115 postseason games under his belt, Horford knew just how important it was going to be for the Celtics to establish their defensive intensity at the start of their best-of-7 Eastern Conference Semifinals series against the Bucks.

Heading into Sunday's matchup, many wondered how the Celtics were going to defend MVP candidate Giannis Antetokounmpo.

It wasn't just a talking point heading into Game 1, slowing down the Greek Freak was a necessity for the Celtics in order to steal home court advantage in Milwaukee and no other player did a better job of disrupting Giannis than Horford. The veteran big man made Antetokounmpo as uncomfortable as we've seen all year long.

Giannis managed to score 22 points but it took him 21 attempts to get there, while he shot at a 33.3 percent clip from the floor. Horford on the other hand, finished with 20 points on 8-of-16 from the floor, including 3-of-5 from deep to go with his 11 rebounds -- it was his third double-double in five playoff games.


"We said all year, you can't overstate Al Horford's importance to our team," Brad Stevens said after the Celtics' 112-90 win over the Bucks. "Obviously, the numbers back that up, his ability to stretch the floor against size and post smalls, and also on the other end be very versatile defensively. I thought we tried to guard Giannis as hard as we could but he still ended up with 20 points and made a bunch of threes in the second half -- that's a collective effort and Al was obviously assigned to him quite a bit but I thought the whole team was cognizant of him.

"We are going to have to look at it and see what we can do better. Al is a huge part of our team and I am thankful for the long, long, long, periods of time in between timeouts in the fourth quarter."

Antetokounmpo finished the opening frame without a made field goal (0-for-3) before eventually finding some offensive rhythm in the second quarter but the Celtics certainly made him work for it. Horford was his primary defender while other guys like Aron Baynes and Marcus Morris, who returned back into Stevens' starting lineup, took turns covering him on defensive switches.

Bucks head coach Mike Budenholzer designed plays for his All-Star forward to penetrate the paint throughout the second half -- when Giannis did most of his damage offensively but it didn't deter the Celtics' defense from being relatively successful on guarding the most talented player in the series. In the paint, where Antetokounmpo typically does most of his damage unlike any other NBA player, he finished 4-of-16 in what was his worst offensive performance of the year.


"As great as he's been this year, he hasn't been perfect every night," Budenholzer said. "He's hard on him so there will probably be some point where I put my arms around him and tell him, 'You're going to be great.' He's been so good so many nights. Again, credit to Boston, they're doing some things well. I think Giannis will play better and we'll work and look at some things between now and Tuesday. I'm sure he's looking forward to Tuesday just like we are."

Credit the Celtics for the way they were able to shadow Antetokounmpo when he put the ball on the floor while Horford stayed in front of him. In the paint, the double-team came from the Celtics, when Giannis was forced to alter his shots or earned trips to the free-throw line -- where he netted 5-of-10 attempts but was unable to find consistency from inside the arc.

Antetokounmpo, who has had his shot blocked in the paint only 71 times this season (per Kevin O'Connor of The Ringer), was denied three times in Game 1. Once by Jayson Tatum, twice by Horford.


"Our group, we all understood how we needed to defend and how dangerous he is once he gets it in the paint," Horford said. "Constantly tonight, we had a couple of breakdowns but for the most part I feel like everyone was very aware. Our guards did a good job of helping and closing down lanes and things like that, we just wanted to challenge and contest every shot as best as we could and I felt like we were able to do that tonight, today."