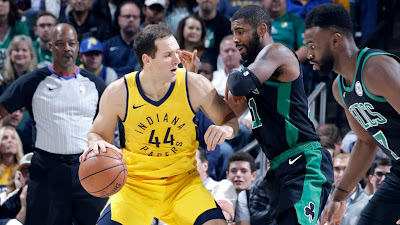 The NBA Playoffs will begin for the Celtics on Sunday afternoon at TD Garden in their first round match-up against the Indiana Pacers.


It all starts Sunday ☘ #BOSvsIND


The NBA released their TV schedule for this weekend as the 2019 postseason will tip-off on Saturday.

The 49-33 Celtics closed out the 2018-19 campaign with a 6-2 record, beating the Pacers (48-34) twice in that span (home and away), while winning the regular season series 3-1. Indiana's lone win against Boston came in November on a Victor Oladipo game-winning 3-pointer.

The Pacers All-Star, who's recovering from a leg injury, is the only player listed as 'out' on Indiana's injury list, while Marcus Smart (torn oblique) will also miss this first round series for the Celtics.

It was announced on Wednesday night that Smart would be out 4-6 weeks, while Brad Stevens has yet to confirm who will start in the backcourt alongside Kyrie Irving for Game 1.

The Celtics are 2-4 this season in Sunday games, and 1-1 in early afternoon starts (both at home).