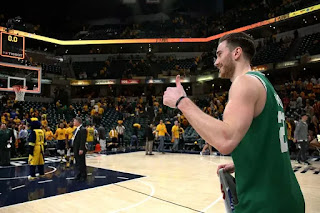 INDIANAPOLIS -- For Gordon Hayward, Indianapolis is unlike any other city. Basketball runs deep around these parts and as a kid, Hayward immersed himself into the culture.

His fondest memory dates back to his high school playing days in 2008 when he hit the game-winning shot for Brownsburg High School, a school 20 miles outside of the city, in the state championship -- to this day, it's his favorite basketball moment and it happened at Bankers Life Fieldhouse.


"High school basketball in Indiana means everything so it was a memory that will last forever," Hayward said prior Sunday's Game 4. "That was a lot of fun. It was actually the day before my birthday too, so we got back to the gym, the whole town sang happy birthday. It was quite an extravaganza. It was cool."

11 years later, Hayward returned to the same court to help lead the Celtics sweep the Pacers. In what was a hard fought series for Boston -- only one of the four games ended with a double-digit differential -- the fourth and final game ended with a 110-106 series-clinching victory and Boston couldn't have done it without Hayward.

His team-high 20 points on 7-of-9 attempts, including 3-of-3 from deep and nine points in the final five minutes of play, made all the difference as the Celtics turned a four point lead into a 10-point Pacers deficit with one minute left.


"It felt really good out there," Hayward said. "I thought tonight was a total team effort. At different points of the game, different guys stepped up and to do it in front of friends and family was a lot of fun."

Hayward was due for a performance like Sunday's, he finished the regular season on a high note, continued to show confidence in his scoring abilities and led the second unit as Boston's depth turned out to be the difference in Game 4.


"It's been a long process to get back to where he probably feels as good as he does now and we knew that going in," Stevens said. "We said all year: '20, 40, 60, 80,' every 20 games he's going to be a little bit better. He was big at the end of the game, for sure. That 3-point play kind of push the lead out and then he obviously made some shots, made some plays. He did a good job."

He couldn't have asked for a better Easter Sunday.


"I actually had the opportunity to have my family here -- all three of my girls and wife, so seeing them before the game is amazing," Hayward said. "I know they don't necessarily know what's going on, I know they probably don't care that we just swept the Pacers but they were happy they got some chocolate bunnies this morning. They got a chance to see me out on the court so that's always great, and obviously my mom and dad.

"I think the cool part is so many people that I don't necessarily know that have continued to root for me and have been supportive of my career from Brownburg and obviously at Butler, as well. Every time I come back here, I always have so much support and I really appreciate that."

Hayward's stellar performance didn't come as a surprise for Kyrie Irving (14 points), who struggled on 4-of-13 from the floor.


"I knew there was going to be a spark off the bench tonight, that was much needed," Irving said about Hayward. "They were throwing multiple bodies at me, making sure the ball was out of my hands and making other guys beat us and that person tonight was Gordon Hayward. This is his city and I'm glad he had the chance to put on a performance like that in a closeout game."

The Celtics, projected to matchup against the Bucks in what will be a very competitive series between the two, will certainly have their hands full. However, performances like what we saw from Hayward Sunday could be the difference between a second-round knock out and a Eastern Conference Finals berth.

Boston remains undefeated this year when Hayward scores 20-plus points. It's a different, deeper team when the backup guard is playing at such a high level and Hayward continues to prove that time and time again as the Celtics hope this kind of momentum will carry over into the next series.

In the meantime, Boston will enjoy something that is very hard to achieve unless you're fortunate enough to sweep a team out of the postseason; rest.