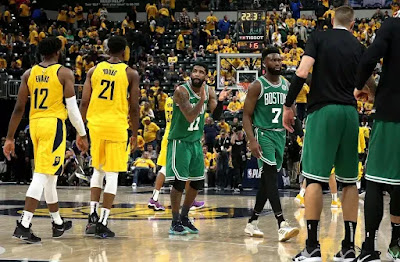 Indiana's defensive approach to make Irving pass the ball and see if his teammates could beat them instead of letting Irving take over, led to Boston's best quarter of the series right out of the gate. The Celtics closed out the opening frame with a postseason-high 41-point quarter, including 12 from Jaylen Brown, who went a perfect 4-of-4 from the floor while his team as a whole shot at a 66.7 percent clip.


"I think they made it very clear what their emphasis was in their pregame, Nate McMillan, as well as when the ball first got tipped," Irving said after the Celtics' 104-96 win. "In the beginning, I knew what to expect and those guys, J.B. (Jaylen Brown), Aron (Baynes), Al (Horford), Jayson (Tatum), to start off the game the way we started and feel pretty confident in the way of the flow and it was our style of play, I feel like it just made every other thing a lot easier.

"Just get back in transition because we're taking great shots. Everyone is driving to the basket. I feel like we settled in the second half a little bit but we got back to what we do best and that's driving the basketball and making plays for one another."

Irving finished with a game-high 10 assists to go with his 19 points. Throughout stretches when Brown, who led with a game-high 23 points, and Jayson Tatum (18 points) caught fire, Irving sprinkled in contested jump shots inside and beyond the arc -- where he drained 3-of-7.

Although the Pacers managed to wipe away a 15-point first-half deficit, the Celtics grabbed the momentum down the stretch where they were -- for the second straight game -- able to out-hustle their opponent with efficient late-game execution.


"He's a great player, he's a playmaker," McMillan said about Irving after the loss. "He's a guy that does a great job of reading the defense. He's unselfish, if you're committing too to the ball, he's giving the ball up and those guys were knocking down open shots. He creates opportunities for his teammates as well as for himself. You have to just pick you poison.

"We changed our defense a couple of times tonight, trying to trap, get the ball out of his hands. We went to switching, try to stay in front of him and he pretty much made us pay every mistake that we made."

The Celtics will look to sweep the Pacers Sunday afternoon in Indianapolis.