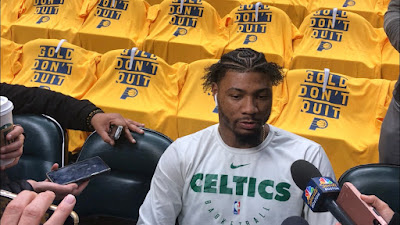 INDIANAPOLIS -- The Celtics are far from setting a return date for Marcus Smart.

Their focus of late has been getting the starting guard back to doing everyday things before the discussion of getting Smart back on the floor takes place. However, Smart did make the trip to Indiana and much like Game 2, will be on the bench with his teammates for Game 3.

Still, Smart managed to get a few light shots up at Celtics shootaround Friday morning and had a very positive outlook on his recovery.


"I'm still very ecstatic with the progress that I've made," Smart said. "I'm nowhere near, obviously, coming back but to be able to get out on the court and get some shots up and do active things is great progress for me. It definitely still hurts, doesn't hurt as much as the initial injury or as much as it did a couple of days ago. But there's definitely still some pain there with scar tissue and obviously the tear and everything.

"We're not trying to rush anything, we're monitoring everything I'm doing and like I said, we're pleased with the progress."

If the Celtics advance to the Eastern Conference Semifinals, they're likely going to have to compete without their starting guard. The two-week timetable set for him to start jogging will happen in the latter half of the series, well before Smart would be able to join his teammates for full 5-on-5 contact.


"I can't run yet, but I'm walking fluidly," Smart says. "I'll probably start jogging the next couple of weeks and try to see where I'm at with that running but we haven't even tested any of those. We're just trying to get back to everyday life stuff. That was our main goal, being able to breathe normally, walk normally, excruciating pain, things like that and the progress we're making -- we're pleased with it."