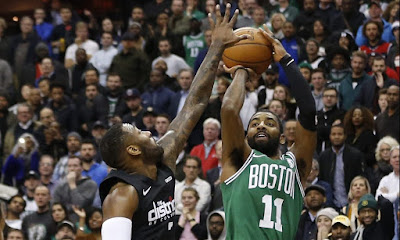 There are few players in the NBA as clutch as Kyrie Irving.

It's a vital piece of his game that can't be taught and is rarely duplicated. Superstars either have it or they don't and when it comes to Irving's clutch gene it can make all the difference between winning and losing.

It was Irving who put his team on his back when the Celtics made their biggest comeback of the season last month against the Suns, where his 18 points in the final 17 minutes erased a 22-point deficit and when his team needed him down the stretch against the Pistons, Irving outscored his opponent behind his 13 fourth-quarter points. But what he did in Washington D.C. Wednesday night was a cut above the rest.

Facing off against All-Star guard John Wall, Irving put on a show down the stretch of Boston's 130-125 overtime win over the Wizards. He put the team on his back when he scored 12 of the Celtics' 17 points in the extra period, including back-to-back 3-pointers in Wall's face.

The first was a step-back in front of the Celtics' bench with little-to-no space between him and Wall and the other came from three feet behind the arc.


"Those last two shots were amazing," Brad Stevens said after the game. "The one in front of our bench was a joke -- how tough that was. He made it look easy."

Wall returned to the court after suffering an ankle injury in the final minute of the game. While chasing a rebound, Irving fell onto Wall's ankle and it seemed like Wall wasn't going to return when team doctors tended to him.

But the spirit of competition compelled the All-Star point guard to attempt to slow down Irving and it failed as Irving welcomed Wall to two treys in his eye -- which put an end to the Wizards' hopes of forcing a second overtime.


Irving finished with a game-high 38 points. His incredible performance stretch the Celtics' winning streak out to seven games.

Marcus Morris (27) had himself another 25-plus point night to go with his 12 rebounds and Marcus Smart poured in 27 points to go with nine boards.

John Wall's 34 points and 13 assists led the Wizards, Bradley Beal and Jeff Green each had 22 points and Kelly Oubre Jr. added 20 points off the bench.

It was the first win of the streak that didn't result in a win by a nine or more digit margin. Boston is now the hottest team in the league and with a healthy Irving and the Hawks awaiting the Celtics at TD Garden for a Friday night matchup, it's safe to say this streak have a great chance of stretching itself out.

Celtics: Scored a season-high 24 second-chance points on 14 offensive rebounds. Morris is averaging 29 points in his last two games. Boston was also perfect from the free-throw line -- where they went 25-of-25. It's the first time a Celtics team has made 25 consecutive free throws without a miss since 1990