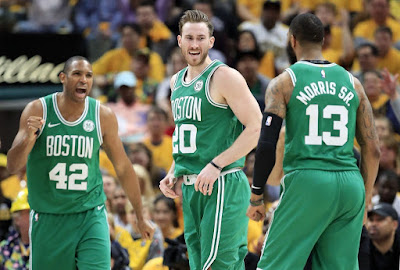 The Celtics will advance to the Eastern Conference semi-finals after closing out the Indiana Pacers 110-106 in Game 4 at Bankers Life Fieldhouse, to complete a four-game sweep.

Gordon Hayward enjoyed some home cooking, finishing with a team-high 20 points on 7-of-9 shooting, including going 3-3 from behind the arc off the bench, while playing in front of family and friends. Jayson Tatum and Marcus Morris each added 18 points, 8 rebounds respectively for the Celtics to wrap up their first-round series in Indy.


"I knew there was going to be a spark off the bench [on Sunday] and that person was Gordon Hayward," said Kyrie Irving, who scored 14 points and dished out 7 assists. "This is his city. I'm glad he had a chance to put on a performance like that in a closeout game."

In the only back-and-forth and evenly matched tilt of the series, that featured six lead changes and 12 ties, the Celtics took full advantage of a Flagrant-1 call on the Pacers' Corey Joseph with 6:45 left to play. Tatum hit both free-throws to put Boston up 83-82 and Al Horford (14 points, 12 rebounds) made 1-of-2 from the charity stripe on the next possession, followed by a Morris 3-pointer and a Hayward three-point play to give Boston a 90-83 lead with 4:15 in the final frame.

Morris and Hayward combined for five made 3's in the final five minutes, including three 3's in a three minute span to give the Celtics their largest lead of the night --102-90 with 1:09 remaining on the Pacers' season

Indiana drained four 3's in the final seconds to keep to it close, but it wasn't enough to extend the series to a fifth game in Boston.

The Pacers get swept out of the first round for the second time in three years, while the Celtics pull off their first playoff sweep since 2011 against the Knicks and only the sixth time overall they have achieved such a feat in their franchise history.


"They got hot," Pacers forward Thaddeus Young said. "They started making shots and we stopped making shots. That's one of the biggest thing that's haunted us through this whole series."

Boston shot 46.2 percent from the floor and seven players scored in double-figures despite a poor shooting performance from their All-Star Kyrie Irving (4-of-13), who was checked out by team trainers after taking a tough screen late in the first quarter.


"You have to earn it every time you play the Pacers," said Brad Stevens, who will advance to the second-round for the third straight year. "They just play so hard, and they play so together. If you take your foot off the gas at any point in time, you're in trouble."

Stevens will enjoy the first four-game series closeout win of his professional coaching career for at a day or two before the Celtics officially find out who they'll face in the second-round.

Boston is awaiting on the winner between the 60-win Milwaukee Bucks, who lead 3-0 and the Detroit Pistons. Game 4 of that series is set for Monday night.

The Celtics and Pacers each finished with 18 assists on 36 made baskets, while both teams grabbed 43 rebounds a piece. Boston turned the ball over 17 times, bringing their total turnovers in four games to 64 for the series. Jaylen Brown netted 13 points on 5-of-9 shooting, to go along with 6 rebounds and Terry Rozier contributed with 11 points.