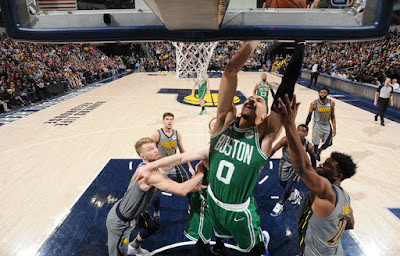 If there was any doubt that the Celtics couldn't win in Indiana to take control of the fourth seed, then Friday night clearly changed all of that, with a 117-97 beating of the Pacers on their home floor.

Gordon Hayward led the Celtics bench once again with 21 points on a perfect 9-of-9 from the field and 3-of-3 from the free throw line, becoming the first in franchise history to score at least 20 points and not miss a single shot since Kevin McHale in 1986.

Hayward, an Indiana native, has scored in double-figures in seven straight games (season-high), as the Celtics have won five of their last six.


"Hayward is playing really well," coach Brad Stevens said. "He's attacking with great physicality. That's what he does. He's still not forcing anything that's not there. It's good that he's playing this way."

Jayson Tatum finished with a game-high 22 points to go along with 7 seven rebounds, while Kyrie Irving added 17 points and 6 assists to give the team it's third straight win and a 3-1 regular season edge over Indiana.

With home-court advantage on the line for both teams and a 47-32 record prior to tip-off, the Celtics now own the tiebreaker over the Pacers with two games remaining before the playoffs begin next weekend.

The Pacers have struggled as of late without Victor Oladipo, who was the hero in the team's only win over the Celtics this season, when he stole a Hayward inbound pass to hit the game-winner back in November.

Myles Turner led Indiana with 15 points, 7 rebounds, while Domantas Sabonis (6 rebounds) and Tyreke Evans (7 rebounds) each chipped in 12 points respectively for the Pacers, who are 4-6 in their last 10 games.

The Celtics set the tone early when they jumped out to 10-3 lead to start the game and never trailed once the entire night. Indiana's fate was sealed after a 12-3 run by Boston in the third quarter to make it 86-68 with 2:22 left.

No Celtics starter, with the exception of Tatum (34 minutes) played anymore than 28 minutes, as Brad Stevens emptied his bench early in the final frame to rest his rotation players.

It looks like both these teams will more than likely be opponents in the opening round of the 2019 NBA playoffs, despite Boston having a one game lead over the Pacers, home-court has still not yet been decided.

The Celtics will head back to the TD Garden on Sunday night to host the surging Orlando Magic, who are also fighting for a playoff berth for the first time since 2012.

Boston shot 52.2 percent from the field and held Indiana to 41.3 percent shooting on the night. Marcus Morris (knee) returned to the Celtics lineup after missing Wednesday night's win over the Heat, he scored 11 points and grabbed 6 rebounds. Jaylen Brown (back) missed his third straight game, no word if he'll play against the Magic.