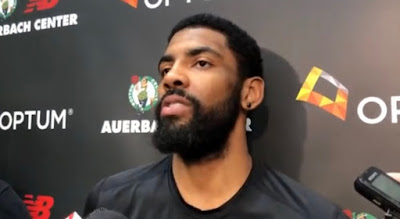 For a player who has criticized the media and how he was portrayed throughout a trying regular season for the Celtics that concluded in a Tuesday night comeback win over the Wizards, Irving was forthright about the mistakes he made this year. He spoke to reporters Wednesday afternoon following team practice, where he opened up about the tum season he's had and the things he dealt with.


"A lot of bull-(expletive), a lot of just the up-and-downs that just could have been handled better from a professional standpoint, and I'm talking about me personally, I'm not talking about our team," Irving said. "I had a lot of questions, a lot of things that weren't being answered straight up about what it takes to be a great professional in this league and I think that the frame of that is just outdated, in terms of what you have to be every single day and it's not that hard.

"The media -- all the stuff that comes with it. I think that it's an exciting part of that, that you have to be aware of that but the real part is just, you know, literally what I used to wake up every single morning to do -- that's to put a ball in the hoop and be really great at it."

Irving was then asked if he spent a lot of time this year questioning himself or simply questioning the way things are handled between the media and the players.


"I would say just goals that I had," Irving said. "Questions of what I was capable of doing and I've always had the answers, and I just looked in the wrong places. I think that that for my career has been the biggest mistake since I came into this season, trying to get validation for stats or other things that really don't have any validation in my life and allowing all of this to bother me. All you guys (media), all the questions -- everything that comes with it is just so irrelevant to what I do on the court and how hard I work every single day.

"That's been the biggest lesson I've learned. The way I want to treat my career going forward, rather than thinking about the last eight years of what I've struggled with or thought I was struggling with."

The lessons Irving has learned this year has helped him see the big picture as he heads into another postseason run while leading the way for the Celtics.


"I'm fighting for my deeper place of a lot of my ancestors, a lot of my descendants that have come before me and none of this stuff from the cameras to the system really matters," Irving said. "We all belong to that system and you guys ask the questions for a system, as well."