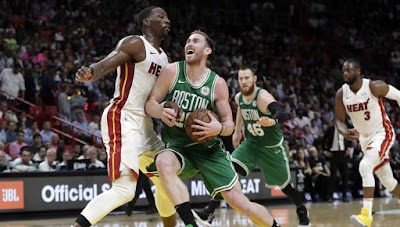 Gordon Hayward is looking more like his old All-Star, pre-ankle-injury self these days and it couldn't have come at a better time for the Celtics, as they beat the Miami Heat 112-102 on Wednesday night.

It was Boston's second straight win over the retiring Dwyane Wade and company this week, as both teams continue to make their push towards the postseason and keep pace with seeding in the east.

Hayward finished with a game-high 25 points, making it his sixth consecutive outing (season-high) of scoring in double-figures, to go along with 8 rebounds and 5 assists in 32 minutes off the bench to lead the Celtics.

Al Horford, who was coming off a triple-double against the Heat at the TD Garden on Monday, netted 21 points, grabbed 8 rebounds and dished out 4 assists. It was his sixth-straight game of scoring at least 19 points.

Hayward and Horford held off Miami's last attempt at a late fourth quarter rally in front of the American Airlines Arena's home crowd. While Kyrie Irving (23 points, 4 assists) was on the bench with five fouls and only 2:40 left to play, Brad Stevens trusted his two veterans to make huge shots and get stops down the stretch.


"Guys did a good job on both ends," coach Stevens said afterwards.

It was the first time this season that the trio of Hayward, Horford and Irving each went for 20 points or more, respectively, in the same game.

Jayson Tatum scored nine of his 16 points in the final frame, as the Celtics used a 10-2 run to extend a two-point lead back to double-digits before Irving subbed out. Aron Baynes recorded a double-double of 10 points and 10 rebounds in his sixth-straight start since returning from an ankle injury.

Dion Waiters had 21 points and 5 assists for the Heat (38-40), who are a half game out of the eighth and final playoff spot after back-to-back losses to the Celtics. Hassan Whiteside added 18 points and 15 rebounds off Miami's bench, while Bam Adebayo chipped in 12 points and 12 rebounds.

Wade played in his second to last home game of the season and career, while his team looks to extend the season by clinching a playoff berth one more time for the future Hall-of-Fame guard.


"Kind of like a playoffs kind of game," said Wade, who had a stat line of 17 points, 7 rebounds and 6 assists in the loss "It was a good basketball game. They held us at bay. Every time we tried to make a run and get close, they made something happen."

The Celtics at 47-32 still hold the tiebreaker over the Pacers (47-32) for the fourth seed, as both teams will clash for a second time in a week on Friday night at Indiana.

Despite homecourt advantage in the first round being on the line and with three games remaining, Boston will look to prove once again that they are capable of winning on the road at least one more time before the regular season officially concludes next week.


"I think we're doing a great job right now just being patient, taking the shots that are afforded and being aggressive," Irving said of his teammates.

The Pacers will host the Celtics at Bankers Life Fieldhouse in what should be a playoff like atmosphere, while it can also be viewed nationally on ESPN.

Celtics were definitely aggressive against Miami, as they shot 47.5 percent from the field and scored 44 points in the paint, while also handing out 25 assists on 38 made baskets. Boston hit 27-of-31 from the free throw line, including Gordon Hayward going 12-of-13.

Jaylen Brown missed his second game with lower back spasms, he could be back as soon as Friday vs the Pacers, if not, more than likely Sunday against Orlando at home.