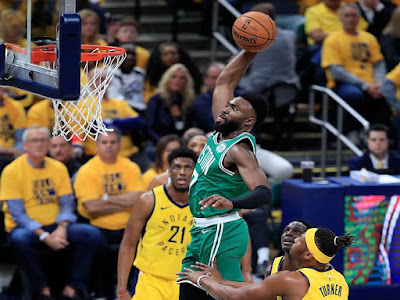 The Celtics are one game away from sweeping the Indiana Pacers after a 104-96 win in Game 3 at Bankers Life Fieldhouse.

Boston's defense to start the second half led to only 12-third quarter points by the Pacers in front of their home crowd, giving the Celtics all the momentum on their way to a sixth straight victory since January over Indiana.

Jaylen Brown finished with a game-high 23 points on 8-of-9 shooting from the field, including hitting 4-of-5 from behind the arc, to go along with his 7 rebounds. Meanwhile, Kyrie Irving recorded a double-double of 19 points, 10 assists and 5 rebounds for the Celtics.


"We've come a long way," Irving said. "We're all making sure we're giving each other confidence and doing the little things to ensure we win. When you have that type of camaraderie, executing is a lot easier. Now that the stakes are higher, we're settling into who we want to be."

Jayson Tatum added 18 points, 7 rebounds and Al Horford chipped in 16 points, 8 rebounds for Boston, who are on the verge of reaching the Eastern Conference semi-finals for the third straight year.

Indiana cut a first quarter 15-point deficit, forcing nine Celtics' turnovers, to led 61-59 by halftime. The Pacers would jump out to five point lead in the third before Boston clamped down defensively.


"In the third quarter, we lost our patience," Pacers coach Nate McMillan said. "We took quick shots, bailed them out, and lost our rhythm."

Tyreke Evans scored a playoff career-high 19 points off the bench for the Pacers, while Bojan Bogdanovic continued to struggle offensively, going 2-of-8 from 3, scoring 15 points on 17 shot attempts. Myles Turner's 13 points, 7 rebounds and Thaddeus Young's 11 points, 9 rebounds weren't enough to fend off the Celtics frontcourt.

Once Boston regained their lead midway through the third, they ended the quarter on a 9-2 run and never looked back. The Celtics sealed the victory with another 10-4 spurt with just over two minutes left to play and a 98-91 lead.

The Celtics shot 15-of-34 from 3-point land, hitting 8-of-10 in the first quarter alone for 41 overall points, the most the Pacers have allowed in the first in it's NBA playoff history.

Indiana now faces being swept in the postseason for the second time in three years, while the Celtics look to complete a four-game sweep for the first time since 2011 against the Knicks, come Sunday afternoon.

Boston out-rebounded the Pacers 56-49 and assisted 23 times on 38 made baskets. The Celtics scored 20 points off of 11 turnovers by Indiana, while the home team forced 13 Boston turnovers (bringing the total to 47 for the series).