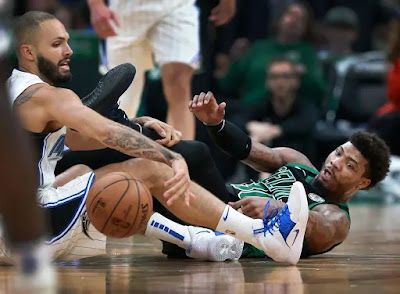 The Celtics dropped their final home game of the regular season Sunday night against the Magic at TD Garden.

The good news for the Celtics is they will have home-court advantage against the Pacers in the opening round of the playoffs, which kicks off next weekend. However, the bad news is the Celtics may start their best-of-7 series without two of their starters.

Jayson Tatum left in the first quarter of Boston's 116-108 loss against the Magic with a shin contusion before Marcus Smart suffered a hip injury in the second half, and needed to be helped off the floor and into the Celtics locker room.


"Tatum had a shin contusion that evidently he had before the game," Stevens said. "I didn't know about it but he just said it felt a little off when he jumped so hopefully it's nothing major. He'll get checked out tonight and tomorrow, and we'll go from there.

"Marcus Smart has an oblique bruise. Which means he got hit right there," Stevens said while pointing at his right hip. "I guess that's better than a, I don't know what it would be called, a strain or whatever but we'll see what that looks like tomorrow. He was a little sore but was walking around, which was good, in the locker room so obviously, glad we got out of there without anything else after that."

When Stevens was asked why he wasn't informed of the discomfort Tatum felt prior tip-off, he simply didn't think anyone thought it was a big deal, by his estimation.


"I don't know, it was never told to me as something that would keep him from playing," Stevens explained. "He did the whole shoot around this morning. He got warmed up, he did his whole workout. He felt great. I don't know. For whatever reason, when he jumped in the first quarter, he felt it. I don't know what it was."

As for Smart, his hip injury was something that was initially ignored when it first happened. In the third quarter, Smart fell to the floor before eventually making his way back to the Celtics bench, and then checked back into the game before he collapsed a second time and needed help as he made his way towards the locker room.

The Celtics will wait to see how Smart's body responds within the next 24-48 hours before setting a timetable for his return.

As for the game, Orlando's third-quarter run turned into a 14-point lead that the Celtics eventually erased but couldn't stay ahead of the Magic. Terrence Ross' 26 points led the charge from off the bench while Nikola Vucevic's 25 points, 12 rebounds kept Orlando's lead afloat down the stretch.

Due to the Celtics' loss against the Magic, there will be no playoff implications on the line against the Wizards, thus, Stevens said he plans to not play his starters much, if at all, Tuesday night.

Magic: Nikola Vucevic, Evan Fournier and Terrence Ross combined for a whopping 75 of Orlando's 116 points. They also netted 9-of-21 from behind the arc -- a big reason for the third and fourth quarter run that turned into a playoff-clinching win. The Magic return to the postseason after seven years and sweep the regular season series vs the Celtics for the first time since the 1996-97 campaign.