Brad Stevens may go deep into his bench in Game 3 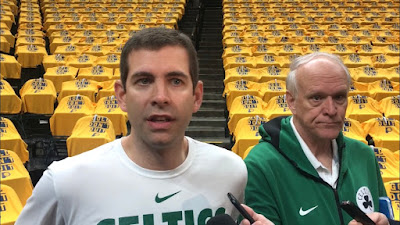 INDIANAPOLIS -- Brad Stevens has never been the kind of head coach to stick with one rotation throughout the course of a best-of-7 series.

He likes to read how each game plays itself out and call shots on the fly. In the past, Stevens has surprised us with starting lineups and in-game changes throughout the postseason and we may be in store for another eye-opening move Friday night.

Stevens was asked if he has considered playing guys like Brad Wanamaker and Semi Ojeleye at shootaround.


"I'm certainly not against anything," Stevens said. "I feel very confident in both of those guys in coming in and giving us good play, if we need them to. If the game calls for it, kind of like it has for Theis in the last couple, then we'll go to it. Brad Wanamaker's play at the end of the season -- he's been a pro all year but to see him have to sit and then step up without much notice (was great). It's not like I went up to him and said, 'Brad, you're going to play 20 minutes tonight,' just threw him in there.

And Semi is always just the most reliable guy ever. You just know exactly what you're getting everyday with his work ethic, commitment to team and all that stuff."

With Terry Rozier averaging 20 minutes in the first two games of the series, it's going to be difficult for Wanamaker to get an opportunity in Indiana, if Stevens sticks with what we saw in Boston. Ojeleye, however, could have a greater chance for minutes for defensive purposes, especially in stretches where guys like Al Horford and Aron Baynes are in foul trouble and Stevens elects to go small.