Brad Stevens on Marcus Smart's progress: 'I don't have any timeline' 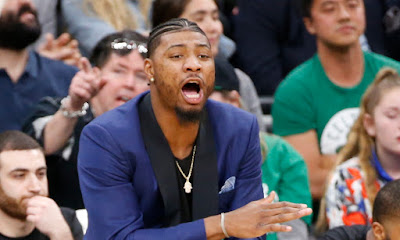 The Celtics have officially found out the start date of their second round series against the Milwaukee Bucks, which will tip-off on Sunday. Now the big question remains; when is Marcus Smart making his return?

The good news is Smart has already begun working out, despite the Celtics guard saying he was at least two weeks away from any physical activity prior to Game 3 in Indiana last Friday.


Treadmill runs and baby jumpers, Marcus Smart is ahead of where he thought he'd be.

Alas, it doesn't matter the activity he can do, it's about when that oblique tear has healed enough to let him get back on the court.


While Brad Stevens continues to prepare for Giannis Antetokoumpo and the Bucks, the Celtics had practice at the Auerbach Center on Wednesday and Smart once again was seen jogging on a treadmill for the second day in a row.


"I don't know what he’s doing up there, was he jogging?" asked Stevens on Tuesday. "So I didn't really see it. It doesn't surprise me because they said he’s making good progress. But it didn’t sound like the timeline was changing all that much from when I last talked to the training staff about it. I really haven’t talked about it in the last probably week or so."

Smart tore his left oblique on April 7 and a time-frame for his return was originally 4-6 weeks. That would mean the Celtics guard would still be in street clothes until closer to the Eastern Conference Finals given that Smart sticks to that plan.


"It seems like it's trending well, but I don't have any timeline," Stevens said during his Wednesday interview on 98.5 The Sports Hub’s Zolak and Bertrand. "I think it was four to six weeks is what we were told initially and there is just so few examples of this in basketball. … He's really progressed as well as could have been hoped is what I've been told, but they haven't said that he’ll be ready anytime soon."

Marcus Smart started on the elliptical and now is getting up more shots pic.twitter.com/GHepIpx95a
— John Karalis 🇬🇷 (@RedsArmy_John) April 24, 2019


In between his workout on the elliptical and the treadmill, Smart got up some shots including jumpers off of one foot as well, to conclude his jam packed day.

Last year Smart missed the start of the Celtics series against the Bucks with a hand injury and came back sooner than expected in Game 5. It should be interesting if Smart can return to the lineup for Boston at all this time around, especially in any of the team's games at TD Garden.