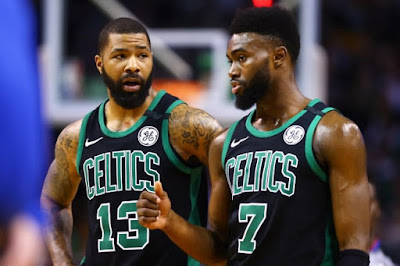 The Celtics will head into Indiana with playoff implications on the line in arguably the most important game of the season and a short-handed bench.

Brad Stevens updated the team's injury report and Marcus Morris will miss his second straight game, with a sore right knee, when Boston faces off against the Pacers Friday.

Morris sat out in the Celtics win over the Heat on Wednesday night and considering the forward has been relatively healthy in 2018-19, combined with his down shooting percentage as of late, this shouldn't be anymore than just a reset before the start of the postseason next weekend.


#NEBHInjuryReport Brad Stevens says Marcus Morris it OUT tonight. Jaylen Brown, meanwhile, got out of non-contact drills this morning just fine and he could be available to play.
— Boston Celtics (@celtics) April 5, 2019

#NEBHInjuryReport for tomorrow vs Indiana:


Jaylen Brown has missed the last two games with lower back spasms and according to Adam Himmelsbach of the Boston Globe, the Celtics guard was still in good amount pain prior to the team's victory down in Miami.


Jaylen Brown on his back spasms: "I’ve never experienced it [like this] where it’s hard to bend down, it’s hard to stand up, or put your socks on."
— Adam Himmelsbach (@AdamHimmelsbach) April 3, 2019

More Jaylen on his back spasms: "I’m uncomfortable just sitting down right now. It’s like my back feels like it’s just like squeezing together. It’s hard to reach over, hard to move to the left, move to the right. It’s like a sharp pain, plus the tightness.”
— Adam Himmelsbach (@AdamHimmelsbach) April 3, 2019


Danny Ainge provided some insight on Brown's injury during his weekly appearance on Boston's 98.5 The Sports Hub.


"He just had one of those freaky back spasms. He reached down to pick up the ball," Ainge said on The Toucher and Rich show. "I've had that happen to me a few times in my career. It's hard to explain but he has back spasms and they usually take a few days and we’re hoping he can be ready to go here soon."

Brown, who is averaging 14 points per-game this year as the Celtics most consistent scorer off the bench, has been shooting 50 percent from the floor, including 41 from the three-point line since the All-Star break.

The Celtics and Pacers are tied with the fourth best record in the East at 47-32, as Boston currently holds the head-to-head tie-breaker 2-1, before the two teams match-up tonight at Bankers Life Fieldhouse. Friday night's winner would control their chances at grabbing homecourt advantage, most likely against each other, in the first round of the playoffs.

Indiana's roster is a bit banged up as well despite already being without Victor Oladipo for the last two months. The Pacers have relied heavily on the starting backcourt of Darren Collison and Wesley Matthews, who have both missed the last two games and are listed as questionable against Boston.

A week ago the Celtics edged out the Pacers at TD Garden with a full roster, in a back and forth game that went down to the wire in the fourth quarter.

The Celtics announced via social media that Marcus Morris has now been upgraded to questionable, while Jaylen Brown has been downgraded to out for tonight's game against the Pacers.


Brown, who injured his back bending over to pick up a basketball during Monday's shootaround at the Auerbach Center, was hopeful to return to the Celtics lineup on Friday. Ultimately, he choose to look at the bigger picture as the team prepares for a potential deep playoff run, despite the No. 4 seed being on the line.


"That’s what everybody on my part is considering," Brown told Celtics.com. "They don’t want it to be a problem coming into the Playoffs. So, to risk playing now—of course it's a must-win game, but if I risk injuring it further it could possibly lead into the playoffs, and that’s what we don’t want. So, it's definitely about having a game plan, being smart and executing it. That’s what’s important."

The Celtics will be cautious with how they manage their rotation down the final stretch of the regular season, as they make sure everyone is healthy and well-rested before the start of the playoffs next weekend.


"I think it's all about we want everybody to feel really good," said Celtics coach Brad Stevens. "We've got an open line of communications with guys and obviously if there was anything that we thought would linger into nine days from now, then we would address that."