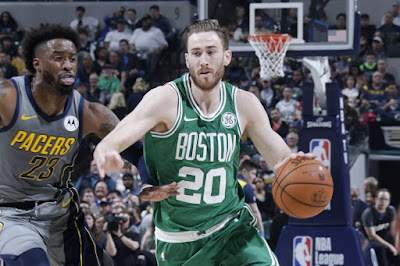 Is this the Gordon Hayward the Celtics have been missing all year long?

It's still early to say if what we've seen lately is going to be the norm from here on out but if you're Brad Stevens and the Celtics, this is a very encouraging sign this late in the season. Averaging 19 points in his past four games is something to feel great about for a guy who has been searching for consistent production this season and maybe it's the difference between the Celtics being a top two team in the east and a fourth seed.

He was a perfect 9-of-9 from the floor Friday night, he finished with 21 points and helped lead the Celtics to a 117-97 blowout win over the Pacers. All of a sudden the Celtics look like they may be just about ready for the playoffs after all. The crucial win gives Boston a one-game lead for fourth place over its first-round opponent, which pretty much locks them in for home court against the Pacers as the Celtics now have a one-game cushion and won the season series.

Unlike Hayward's previous 20-plus point games this season, Friday night he demonstrated confidence on both ends of the floor while attacking the rim with vigor and authority on offense. Hayward didn't settle for one perimeter jump shot -- his outside touch is something he's needed in each of his 20-plus point performances -- instead, he took his defender to the paint, knew when to pull up and when to finish at the rim.


"That's a lot of what I did when I was in Utah, finishing in the lane with different types of finishes off one foot, two feet, fade-back, things like that," Hayward said. "Some is slowly coming back, some is more explosive and can handle the contact a little better, staying on balance. It's coming together nicely and I have to continue to attack and get to the line."

Hayward, much like his point guard Kyrie Irving, is one week away from playing in the postseason for the first time two years. While averaging 24.1 points and shooting 44 percent, he led the Jazz to the Western Conference semifinals -- where they were eliminated by the Warriors.

This is uncharted waters for Brad Stevens. All of a sudden he has another 20-point scorer to go with Irving and it's someone he doesn't have to adjust his offense for, Hayward blends in naturally essentially with any five-man lineup.

Boston has been patient with Hayward's recovery, it was eventually, to some degree, considered a bridge year for Hayward, who has slowly worked his way back and his stats certainly show that.

They've improved on a month-to-month basis but his recent spike throughout the past week could be what also gets his teammates going -- they were on their feet, cheering on Hayward throughout his perfect shooting night -- and pushes the Celtics into a deep playoff run.


"He's obviously attacking with great physicality but that's what he does," Stevens said. "He's playing really well. He's still not forcing it and he just kicked it out and let the next guy make the play, which is the right play so it's good that he's playing this way. He feels good and we're going to keep doing what we're doing and he'll have a lot of opportunities to make plays for himself and more so for others."