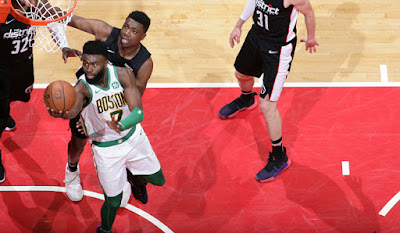 The Celtics were short seven rotation players on Tuesday night, as they wrapped up their regular season with a 116-110 win over the Washington Wizards at Capital One Arena.

In a meaningless game where All-Star Kyrie Irving, Al Horford and Gordon Hayward got to rest up, as Boston prepares for their first round matchup against the Pacers this weekend at TD Garden, Celtics managed to tack on one last win to the regular season. Jayson Tatum (chin contusion), Marcus Smart (hip), Aron Baynes (ankle) and Marcus Morris (foot) also got some extra time off to heal up before the team's postseason run.

Meanwhile, Terry Rozier got to shine in the Celtics regular season finale as he led all scorers with 21 points (on 8-of-15 shooting), hitting 4-of-8 from behind the arc in just 24 minutes of playing time. Semi Ojeleye got his third start of the year, scoring a career-high 17 points, while Jaylen Brown finished with 15 points in limited time, as he continues to rehab from back spasms.

The story of the night was the play of Brad Wanamaker (7 assists, 6 rebounds) and RJ Hunter (4-of-10 from 3), who led the Celtics comeback with 17 points a piece off the bench. Guerschon Yabusele went for 13 points and 5 rebounds, while PJ Dozier also chipped in a double-double of 12 points, 11 rebounds to go along with 5 assists.


"We've had our moments. I'm not sure we've peaked, which I guess is a good thing," Celtics coach Brad Stevens said, when asked about the regular season "Full steam ahead."

Tomas Satoransky led Washington with 19 points and 5 assists, while Bradley Beal scored 16 points and grabbed 5 rebounds in only 17 minutes of action. Ian Mahinmi notched a double-double of 11 points and 12 rebounds for the Wizards, who finished the season 32-50.

The Celtics were down by as many as 21 points and while Brad Stevens sat Rozier and Brown midway through the third quarter, the G-Leaguers of Hunter, Dozier and rookie Robert Williams III (2 points, 11 rebounds and 3 blocks) took it upon themselves to rally back for the win.


"I think it's beneficial for a lot of things," Stevens said about the win. "But certainly to go on the road and have to get stops, or step up to the line, or step up and knock down an open shot, those are things that you only get from playing in games."

Boston finished with the fourth best record in the East at 49-33 and will host Indiana on either Saturday or Sunday at home.

Celtics announced prior to tip-off that they have used their final roster spot by signing guard Jonathon Gibson, who did not play against the Wizards. He played four games for Boston last season before being waived.