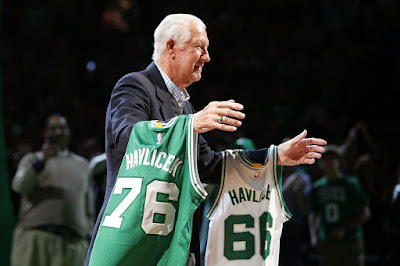 Boston Celtics legend and NBA Hall-of-Famer John Havlicek passed away Thursday night at the age of 79 years old. According to ESPN, he had been battling Parkinson's disease.

Havlicek played all 16 of his NBA seasons with the Celtics from 1962-1978, winning eight championships, including an NBA Finals MVP in 1974. Only two other players in league history have won more championships -- Celtics teammates Bill Russell (11) and Sam Jones (10).

Havlicek still holds the franchise record for the most points scored (26,395) and games played (1,270), all in a sixth-man role and before the creation of the 3-point line -- which didn't come into existence until 1979.

The Celtics took Havlicek with the seventh overall pick in the 1962 NBA draft and he became a 13-time NBA All-Star (one of nine players in NBA history to be selected as an All-Star in 13 straight seasons). Havlicek also made 11 All-NBA teams and eight NBA All-Defensive teams. Along with being named one of the 50 greatest players in NBA history, Havlicek has always been viewed as "The Best Sixth-Man" the game as ever seen.

The Celtics, who have called Havlicek "the face of many of the franchise's signature moments," released a statement via the team's website late Thursday:


"John Havlicek is one of the most accomplished players in Boston Celtics history, and the face of many of the franchise’s signature moments. He was a great champion both on the court and in the community, winning 8 NBA championships and an NBA Finals MVP, while holding Celtics career records for points scored and games played. Named one of the 50 Greatest Players in NBA History, he is enshrined in the Basketball Hall of Fame and his retired #17 hangs in the Garden rafters. His defining traits as a player were his relentless hustle and wholehearted commitment to team over self. He was extraordinarily thoughtful and generous, both on a personal level and for those in need, as illustrated by his commitment to raising money for The Genesis Foundation for Children for over three decades through his fishing tournament. John was kind and considerate, humble and gracious. He was a champion in every sense, and as we join his family, friends, and fans in mourning his loss, we are thankful for all the joy and inspiration he brought to us." [Celtics.com]

The team plans to wear a black stripe with the No. 17 to honor Havlicek on their jerseys. The Celtics also plan on wearing a special Havlicek themed shirt during warmups for Game 3 of the Eastern Conference semifinals against the Bucks, when the series shifts to the TD Garden.

Celtics president of basketball operations Danny Ainge made his weekly appearance on Boston's 98.5 The Sports Hub and spoke about what Havlicek meant to him.


"John, obviously, with his 16 year career with the Celtics [was] one of the great players in our history. When I was a young player drafted into the Celtics, coming to a really good team in the middle of the year, not [playing] too well, not getting too many opportunities to play, John took me out to dinner, he encouraged me, and told me how good I [could] be...he was a great friend. We played golf at Weston Country Club where he was a member. My wife and I spent some time with John and Beth Havlicek on vacation a few times. He's just the nicest man. He's one of the few Celtics who just admired the players of the era...the new era of the 1980s. He was just trying to build everybody up. I remember as a kid he was a hero of mine...watching him play for the Celtics. But more than anything, I'll always remember John as one of the nicest people and greatest friends around."

Former Celtics players reacted to the news, including Bill Russell, who took to social media calling Havlicek "not just a teammate and a great guy, but he was family."


It is getting difficult each time I hear about another contemporary that passes! What is harder is when we lose guys like John Havlicek, he was not just a teammate & a great guy, but he was family. That is how our @celtics teams were. #RIP Hondo @NBA #RIPJohnHavlicek @NBAonTNT pic.twitter.com/VP9MGPjrmZ
— TheBillRussell (@RealBillRussell) April 26, 2019


Paul Silas, who played with Havlicek from 1972 to 1976, expressed what it as like watching up close "one of the greatest shooters."


"I loved the man. I won two championships with him," Silas told ESPN. "When I first got to Boston, we talked all the time. All I wanted him to do was shoot. And when he didn't, I'd go right at him. He really was one of the greatest shooters I ever saw. When we needed a big basket, he was always the guy we wanted to take the shot.''

Dave Cowens believed Havlicek never got enough credit when it came to discussions on who were the best basketball players of all-time.


"Everybody says nice things about you when you die. I wish they said them to John when he was alive. John was always overlooked. They never talked enough about him," former teammate Dave Cowens said. "I used to ask people, 'Why don't you talk about John Havlicek?' It was always Magic [Johnson] and Jerry West and Dr. J, but John belonged in those conversations." [ESPN]

Cedric Maxwell, who played his rookie campaign with the Celtics during Havlicek's final year in the NBA, spoke about how he was the ultimate professional and teammate.


"We had lost a couple of games, and [coach] Tommy Heinsohn was trying to shake things up, so he inserted me in the starting lineup in place of John," Maxwell told ESPN. "I scored something like 21 points against Buffalo in Boston, and we won the game. The first person that came to congratulate me after the game was John. There was no animosity. It was 'Rook, nice game, way to play.'"

Havlicek was also known for his nonstop energy on the basketball court, especially after leading the NBA in minutes played during the 1970-71 and 1971-72 season, where he averaged over 45 minutes per game respectively all off the bench.


"The dude ran all day. Never stopped," Maxwell said. "He wouldn't take long strides -- they were little, choppy steps -- but he was gone. When people used to say, 'You cannot hit a moving target,' that made me think of John."

Following a Bill Russell turnover in Game 7 of the 1965 Eastern Conference Finals against the Philadelphia 76ers, the Sixers down 110-109, had a chance to win the game by inbounding the ball with five seconds left to play. Havlicek intercepted Hal Greer's pass to Chet Walker and got it to Sam Jones, who ran out the clock to save the Celtics season. Boston went on to beat the Los Angeles Lakers in the NBA Finals 4-1 and raise banner number eight.

The play that you will forever hear the voice of Celtics radio announcer, the late great Johnny Most, and his legendary call: "Havlicek stole the ball!" It still remains one of the most recognized calls of any play in basketball history.


"Greer putting the ball in play," said Most. "He gets it out deep, and Havlicek steals it! Over to Sam Jones! Havlicek stole the ball! It's all over!"

To the man they called "Hondo," a nickname that stems from a 1953 John Wayne classic western film, you will be dearly missed Mr. John Joseph Havlicek.