Kyrie Irving is having fun, grateful to be playing in postseason 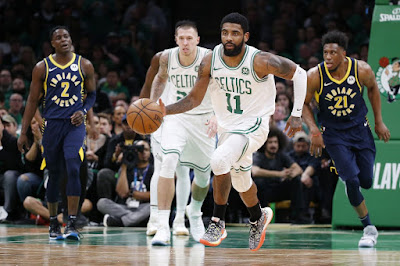 The Celtics All-Star was impressed by his team's late-game execution -- in a game where Boston trailed its opponent in the final two minutes -- but winning in Indiana this upcoming weekend will be a true test for his team.


"We have a lot of talented players and now we're in the postseason and we have to do the little things -- screen for each other, make sure we've very communicative on the defensive end, make sure we're there. That's what's going to get you to the next level. But we've shown that, guys on this team have shown that we can win at home and we've shown that as well. Now it's about going on the road and doing the same thing, playing with an intensity that's needed to get a big time win on the road.

"That's where the big test comes. Here, we have our families. We have everybody here supporting us, rooting us on and now when we go into Indiana, now, it's the total opposite where it's just us in the trenches. We're out there and we have to really focus in, so I'm looking forward to that challenge for us, then I'll probably have a better answer for you. At home it's a little bit easier. We battled back, we did some great things but now it's about going on the road and really showing who we are as a team on the road, in the playoffs."

For Irving, the only member of the Celtics who's made three consecutive trips to the NBA Finals, he knows it's a tall task to push through the playoffs without home court advantage. The Celtics will look to grab the necessary momentum they need to make a deep push, starting by making their best-of-7 series against the Pacers a short one.

And when it comes to a team like the Pacers -- a group that buckled under pressure in its late-game execution via two humongous turnovers -- Boston has to go for the jugular and make its best-of-7 series as short as possible. In other words, there's plenty of reasons why the Celtics should be getting out the brooms Sunday night in Indiana and finishing up a sweep.

The Celtics are by far the superior group. From having the best player in the series, outmatching the Pacers offensively with a core of players that have all been deep into the playoffs before, Boston should close this series out.

Momentum means everything for a team with the odds stacked against them. Kicking off a potential second-round series in Milwaukee against the Bucks sooner rather than later would make all the difference.

Rest will go a long way. It's the only time the Celtics can earn themselves days off prior to a series that will most likely go the distance, if Boston were to knock off the top team in the conference.

The defensive tandem of Al Horford and Aron Baynes means a lot for the Celtics against the Pacers, but they're going to mean a whole lot more against Giannis Antetokounmpo and the Bucks. Baynes isn't anywhere near 100 percent and Stevens has been very careful with Horford -- keeping a close eye on his minutes, preserving as much as he can this early in the playoffs.

Not even a 37-point performance in a comeback win was enough for Irving to say the Celtics are in great shape. The truest test awaits Boston this upcoming weekend in Indy.

Still, this is a very fun time for Irving. Before Sunday, he had never played a playoff game at TD Garden as a member of the home team.


"It felt good to be here in this position, playing in this arena," Irving said. "It's just been a long journey having those two knee surgeries and watching the team last year and finally getting a chance to lace em up for the Boston Celtics in the NBA Playoffs, there's nothing like it."

Irving nearly doubled his Celtics playoff debut scoring output from Game 1 with 15-of-26 shooting from the field, including hitting 6-of-10 3-pointers on Wednesday night to go along with 7 assists and 6 rebounds. He had no issues pulling his team out of a 12-point fourth quarter deficit in a 99-91 Game 2 win to take a commanding 2-0 series lead over the Pacers.


"It was pretty peaceful," said Irving of his performance. "I’m just happy to be able to be part of a lineage of great players that have put on some unbelievable performances here in the TD (Garden) as well as the old Garden. It's really special to know that the fans here they're rooting us on and they want everything to be perfect. It's just not the reality of the game, but we do our best to go out there and really lay it all on the line. We throw ourselves into the game and we hope for some great results. You just got have some honest resolve. It felt good. It felt good to be here in this position, playing in this arena."

Irving understands that the real challenge will begin when the Celtics head to Indiana for Game 3 and 4, as they look to take care of business on the road. It's no surprise that what waits them is the league leading Milwaukee Bucks in round two, whether they planned for the matchup this early or not.