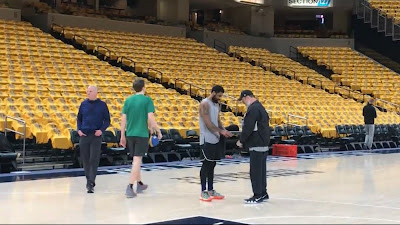 It appears Kyrie Irving was getting his right hand or wrist checked during Friday morning shootaround, as the Celtics prepare for Game 3 against the Pacers.

Cameras also caught the All-Star guard on the bench during Game 2 Wednesday night getting the same hand and or wrist looked at. It may be nothing major, but it is worth keeping an eye on.


Our @Nbcsboston cameras capture trainers working on Kyrie Irving’s right hand/wrist on the bench. Something to keep an eye on. He’s staying in the game.
— Abby Chin (@tvabby) April 17, 2019


Irving didn't really let whatever the issue or non issue is affect his performance, as it was a non factor in the Celtics 99-91 comeback win over the Pacers to take a 2-0 series lead. The veteran point guard finished with 37 points (15-of-shooting, 6-of-10 from 3), 7 assists and 6 rebounds.

Game 3 is Friday night in Indianapolis, while Irving is averaging 28.5 points, 7 assists and 5.5 rebounds through the first two games in Boston.


#Celtics guard Kyrie Irving, who had his hand checked out in Game 2 Wednesday night, gets it checked out at this morning’s shoot around pic.twitter.com/Kq20SxqgpX
— Josue Pavón (@Joe_Sway) April 19, 2019