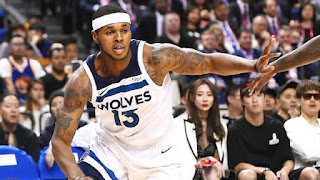 After working out free agent guard Marcus Georges-Hunt last month, the Celtics have officially signed him to a non-guaranteed deal.


"I'm a big fan of [Georges-Hunt]," Brad Stevens told reporters after practice. "Have been since he was here the last time on a training camp roster. I just think he knows how to play, and I thought he impacted our practice really well already."

Georges-Hunt tried out for the Celtics prior to the 2016-17 season before spending the year in the G-League as a member of the Red Claws.


"It's a day-to-day process," Georges-Hunt said. "They invited me here and I'm just taking it one day at a time and getting to know the guys and coming out here and competing for the first time."

While there's still no official word on if the Celtics plan to waive Jabari Bird, who was arraigned last month on assault and kidnapping charges, Georges-Hunt is speculated to be a potential replacement for the second-year guard. He spent part of last season with the Timberwolves, where he scored 59 points in 42 games.