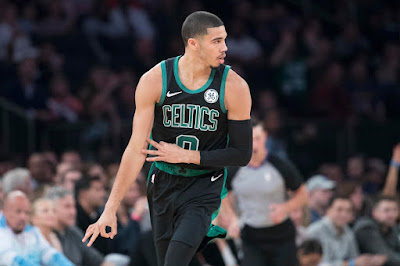 The Celtics held off the Knicks at Madison Square Garden Saturday night for their second win in three tries but it certainly didn't come easy.

Jayson Tatum, who was masterful throughout his 24-point performance, found the bottom of the net on a fade-away jump shot that gave the Celtics a three-point lead with 21 seconds left. But then gave the Knicks a golden opportunity to force overtime when he drew a 3-point shooting foul on Trey Burke with 1.9 left on the clock.

Tatum was a bit overzealous in jumping out on what looked like a 26-foot attempt, however, the youngster caught a break when Burke's front-rimmed his first of three free-throws. He intentionally missed on the third in an attempt to help one of his teammates execute a game-tying put back but the ball ended up in the hands of Celtics big man Al Horford as the game clock expired.

Boston sealed a 103-101 victory. The Celtics clung onto a double-digit lead throughout most of the second half but let the Knicks right back in due to their defensive lapses in the paint and from the perimeter. When Boston buckled down in defending the low post, Knicks guard Tim Hardaway Jr. went off from behind the arc.

With his father Tim Hardaway Sr. in attendance and on his feet, Hardaway connected on two of three treys late and dished one out to Lance Thomas, whose 3-pointer pulled the Knicks to within one point with under a minute left. For a projected lottery team playing without its All-Star big man in Kristaps Porzingis, the Knicks exposed the Celtics' defensive weaknesses in protecting the perimeter and in defending the pick-and-roll.

New York also capitalized on Kyrie Irving's shooting woes. He finished with 16 points on 5-of-16 attempts.

Tatum's late-game execution was Boston's saving grace when the Knicks caught fire from deep. He also grabbed 14 rebounds while causing headaches for head coach David Fizdale and the Knicks as he finished 8-of-15 from the field.

Gordon Hayward (rest) took the night off but is expected to return to the floor Monday night when the Celtics will head back home for a matchup against the Magic at TD Garden.