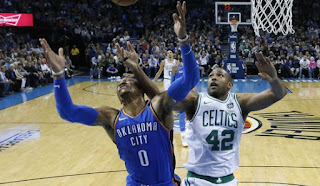 Brad Stevens pulled it off again.

When it comes to drawing up a play towards the end of the game, there aren't many coaches in the league better than the Celtics' head coach. Unlike most coaches that have designated go-to players that always get the ball at the end of the fourth quarter, Stevens will often turn to a guy that opponents least expect will have an open look.

Last spring, it was Terry Rozier who hit a go-ahead 3-pointer to knock off the Bucks in Game 1 of the Eastern Conference quarter-finals out of a timeout, Al Horford got an open look in the paint for a game-winning layup in overtime at the end of Game 3 in the Eastern Conference semifinals against the Sixers and Thursday night Marcus Morris was the recipient of yet another ATO play called by Stevens. The Celtics head coach whistled for a timeout with 14 seconds left on the shot clock and got Morris an open look from behind the arc that found the bottom of the net with 28.7 seconds left, giving Boston a 98-95 lead that eventually turned into a 101-95 win over the Thunder.

Disguised as a play for a Marcus Smart layup, Smart dribbled the baseline -- which drew three Thunder defenders for a pass to Al Horford at the top of the arc before the ball swung to a wide-open Morris at the elbow. And he drained it.

Celtics topped the Thunder, 101-95. Morris led the second unit with 21 points, 10 rebounds and a game-high plus-16 game rating, while Jayson Tatum finished with a game-high 24 points.

For the fourth time this season, the Celtics surrendered yet another double-digit deficit when the Thunder grabbed a 16-point lead at the half. Morris connected on 4-of-5 from deep while also attacking the rim where he finished strong or earned trips to the free-throw line.

Entering Thursday averaging the league's lowest free-throw attempts per night (16.5), the Celtics' trips to the free-throw line was detrimental in keeping up with the Thunder. Morris drained 7-of-8 from the charity stripe as the Celtics made 24 of a season-high 33 attempts.

While most expected Stevens to turn to either Kyrie Irving or Tatum at the end of the fourth quarter, the unpredictable call to turn to the hot hand paid dividends. It was a much needed win for the Celtics, a team that's been searching for steady momentum in the young season.

Celtics: 11-of-32 from the 3-point arc, including Horford's three consecutive treys that was a momentum-changer in the third quarter. It pulled the Celtics to within two points, which eventually erased a 16-point deficit.